Happy Flash Friday everyone! While I’ve been talking about my feelings on the current Flash run a number of products have snuck onto the market that we need to talk about. Some of them are a little strange so I’ve decided to name this week’s group the Oddities. They aren’t that strange compared to other things on this site, but compared to the normal Flash merchandise I thought these were a little different. 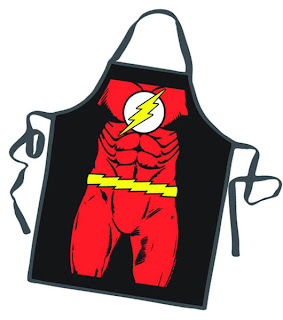 First up is this Flash apron. I had seen aprons with Superman, Batman, and Wonder Woman on them before. It was one of those situations where I had mentally noted that there were aprons only for the big three, even though I didn’t actually want a Flash apron. So this is one of those be careful for what you wish for, because now there is a Flash apron. I’m going to pass on this one. I actually do a lot of cooking but I don’t tend to wear a lot of aprons. Besides I find just having a lower body printed on a shirt or apron is kind of creepy. 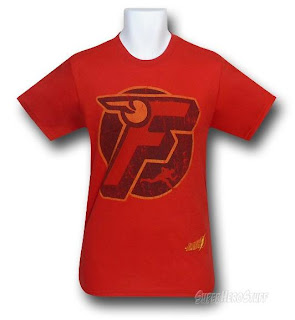 Next up is a shirt I found on Superhero Stuff. I’m listing this Flash shirt with the oddity group because I don’t think I’ve ever seen the “winged F” logo anywhere else. It’s interesting and it immediately says “Flash” to comic fans. I love that there is a little tiny Flash running at the bottom of the logo, I don’t know why but it makes me laugh. I actually like the design and I wonder if we’ll see it pop up somewhere else. 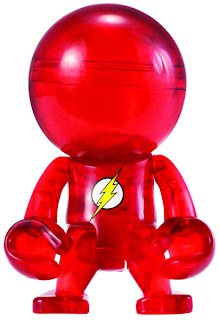 The above figure is a Trexi. Trexi are a series of toys that pretty much have the same body and head shape across the line. IT’s one of those designer toy lines that have suddenly found themselves with a bunch of licensed brands. A quick web search will give you tons of pictures of these little guys with things like Sponge Bob’s face printed onto them. For the Justice League line the company instead went with clear colored plastic and then slapped the superhero’s symbol on their chest. I really like that decision, seeing a Barry Allen face stretched across that globe of a head would be strange. I’ll probably be picking one of these up. 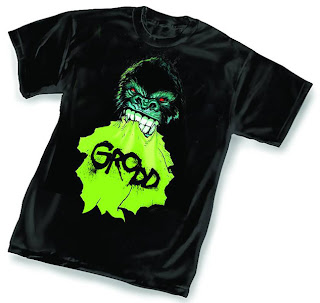 Our final item is another shirt. Like the other one, the design itself isn’t strange; I just don’t recall ever seeing another Gorilla Grodd T-Shirt. Others could certainly exist; I just haven’t run across them yet. The art is stunning. Grodd looks pissed. Super pissed. The yellow paper with his name on it ruins that for me but if you didn’t have that you wouldn’t know it was supposed to be a Grodd shirt. Everyone would be like, “hey, cool gorilla.” I guess you could pretend that every piece of gorilla merchandise you see is actually Grodd in disguise. Anyway, Grodd wraps up this week’s Flash Friday. Have a great weekend everyone.