The Black Beetle: No Way Out 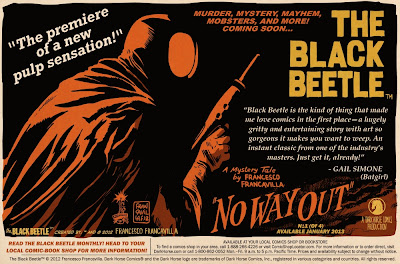 If you’re not familiar with the Black Beetle he is a pulp hero that watches over Colt City. Expect two fisted justice, crazy villains, and lots of bullets. Black Beetle was created on Francesco’s Pulp Sunday blog and was eventually moved over to his own blog. Both of these sites are great places to go if you are still unsure about picking up the Black Beetle comic. If you look far enough back you can even see Francesco’s first teases of the Black Beetle as he worked on the concept. 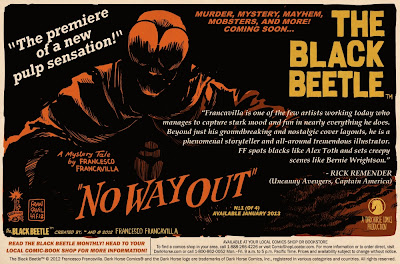 No Way Out isn’t on the shelves right now, but it is available for pre-order. If you have a local comic shop, please tell them to pre-order the comic for you. Black Beetle isn’t another generic character spun out of some spandex filled mega-event. He is a creator owned character in a genre that we don’t see enough of. Every pre-order is going help show Dark Horse that we want to see more of the Black Beetle; that we want to see more original ideas and characters. If the current reboots at DC and Marvel have you disillusioned with comics, please pre-order the Black Beetle and give it a try.