Happy Flash Friday everyone! At some point earlier this week I was watching TV with my wife and a McDonald’s commercial came on. I wasn’t really paying attention to it until I noticed the toy it was advertising was Young Justice themed. After the commercial confirmed that there was a Kid Flash in the lineup I knew I was going to have to have one. I only had to wait a day or two before my wife had tracked one down for me. 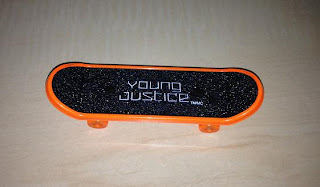 I have to confess I’ve never really understood the fingerboard thing. I think the only one I’ve ever owned before now was a cheap generic one that I got in a grocery store when I was around 8. There is a whole industry built around these things though. They usually take up a good chunk of space in the toy isles, right next to the toy car section. There are miniature grind rails, half pipes, and all sorts of other things to move your tiny skateboard through. I’m not making fun of it, I just never got the appeal. 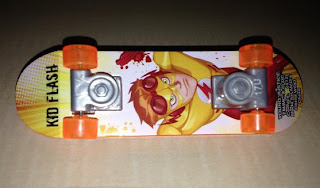 There isn’t a whole lot you can say about a toy skateboard either. It seems sturdy. It has Young Justice printed on the grip taped top surface. The bottom of the skateboard has a great Kid Flash image. Umm…it has four wheels that roll. That’s about all I got on this one. You can pretend it’s a skateboard for the other Kid Flash Happy Meal toy that came out last year. 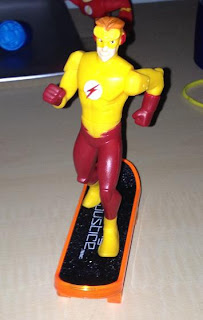 I did want to mention that I think the timing of this release is interesting. Why push Young Justice when DC Nation isn’t even on Cartoon Network right now? I think it speaks to just how quickly and unexpected the decision to pull everything was.