This past Saturday I went to the grand opening of my local Games Workshop store. Now I’ve been hanging out there a lot since I learned of their “soft opening” in August, but I knew I had to come out and see the big event. The store opened at noon, I got there at fifteen after and was immediately surprised by the crowd. People were crowded from the back of the store all the way to the front. 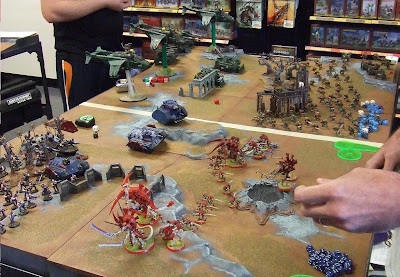 The store was selling limited edition flags and dice bags. The 40K stuff went quick. I think the dice bags were gone 30 minutes after the doors opened. The store also had three competitions going on; one for Fantasy, one for 40K, and one for the best painted army. The Fantasy side was a little sad. It consisted of one veteran player teaching someone who had just purchased an army. Just seeing it on the table did generate interest though, so I doubt the store will be Fantasy-light for long. 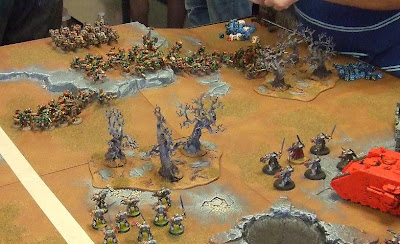 The 40K actually ran almost all the way to the store closing. The big surprise was that the final two armies that faced off against each other were Tyranid and Ork. The Ork army was a massive horde of green and was pretty much unstoppable all day long. They pretty much rolled the bugs over and ground them under their nobby boots. All of the games seemed really casual that day, so everything seemed relaxed and fun instead of hyper competitive. 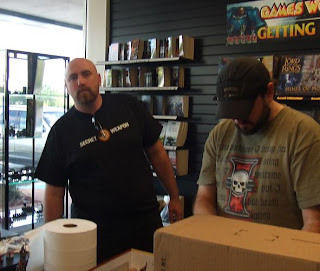 So how did I do in the tournament? Yeah… I’m still working on that. Honestly I don’t even own enough figures yet to field the 1,500 points that were needed for the tournament. I’m working on it, but I’m about 600 points shy. And I would have needed to have them painted too. So far on the painting front I have 10 marines finished and I’m hoping to have 11 more done by Sunday. I got some fantastic painting advice from Game Workshop painter John Shaffer (who looked down just as I leaned in for a picture), so expect to see some pictures of my stuff soon.
Posted by Ken O at 10:37 AM