The adult Flash costume is clearly based on the Wally West costume used in the Justice League cartoon. In fact most of the listings I’ve found for the costume list it as a Justice League Flash. This costume also comes with the sculpted chest muscles. Besides the fact that it looks more like pillow padding then muscle, the sculpted muscle costumes always creep me out. Something just feels wrong about them. 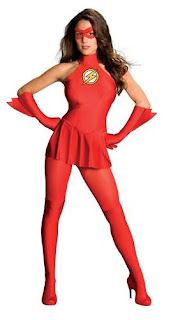 And now a dramatic recreation of the design process for 80% of every woman’s Halloween costume: 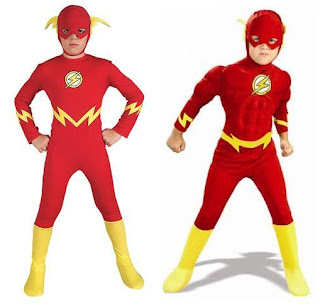 Enough with the adults, here we have two different versions of the kid’s costumes. Aren’t they cute? When dressing your kid as the Flash they have the choice of creepy muscled chest or normal looking chest. Again both of the Flash symbols are based on the Justice League cartoon’s design. I wonder when we’ll see that switch. And when it does change will it go to the classic or the new logo with the yellow circle around it? 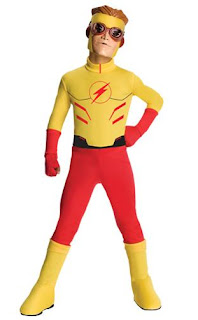 Last but not least we have an actual Kid Flash costume. They wasted no time getting Young Justice merchandise out apparently. This is obviously based on the new cartoon. The suit looks damn good actually. I’m not sure how much coverage the mask has. It could end at the ears or it could be a whole head mask. None of the descriptions of the costume actually give that detail and every website uses the same stock photo as the one I used so that is no help.

That’s it for this Flash Friday and Happy Halloween everyone.
Posted by Ken O at 10:53 AM