Last week I mentioned that I had been watching "Cheers" on Netflix. It is a show that I remember watching as a kid and it has brought back some memories of when alcoholism was hilarious. Ah the late 80's and early 90's were a magical time. The show is still really funny and does hold up. Plus the old dude Al that quips up at random times is pure gold. He does not talk often and I am pretty sure he died around season 6, but when he does talk it always made me chuckle.
Having seen that opening about one hundred and eighty seven times in the past few months, you start to notice some odd things. Not mentioning the weird paintings (that drunk dude is straight looking up that chicks dress under the table during the title) there are quite a few of the old time pictures that have people coming dangerously close to the "douche face". You know the one, with the pursed lips. When did that become the cool way to get your picture taken?

I just want to punch this fucktard in the fucking face.
Which leads me to my thesis - watching in modern times I have found that the character of Sam Malone, played by Ted Danson, might possibly be the point of divergence between normal guys and massive douchbags. 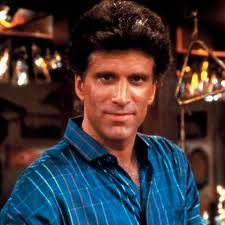 The reason for the suffering?
Sam Malone is the template for the modern douche. All he cares about is looking good and getting laid, at the expense of all other things in life up to and including education and the betterment of ones self. It is like the douche saw this in syndication and began to model their life around the Malone Philosophy™. Of course because the douche is borderline retarded, they failed to take into account that this character was like he was for the express purpose to be laughed at. To top it off the second female lead Rebeca Howe, played by Kirstie the Hutt (although to be fair, back in the Cheers and Star Trek III days she was pretty hot), is nothing but a gold digging whore that will put withup with anything as long as the cash is flowing. Again not something to aspire to.

I will leave you this week with some Al. I am telling you the old man is comedy gold.
As always Let Your F'ing Voice Be Heard in the comments or on our Facebook page.
Posted by Brandon at 3:26 PM