You may remember at the start of the month I posted a picture of a pile of Space Marine goodness. In that shot there was the novel Salamander by Nick Kyme. Well, I finished that book over the weekend and on Tuesday I found myself going to the local Barnes and Noble to pick up the second book in the Tome of Fire Trilogy, Firedrake. 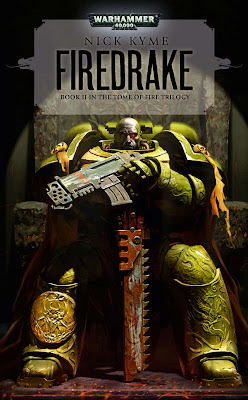 Now this isn’t really about Warhammer 40k, it is more about what Barnes and Noble is doing. When I buy a new book I almost always keep the receipt because I use them as bookmarks. When I reached into my bag to grab the receipt this time I noticed there were two sheets of paper. The longer of the two was the receipt but the shorter one was something I had never noticed before. 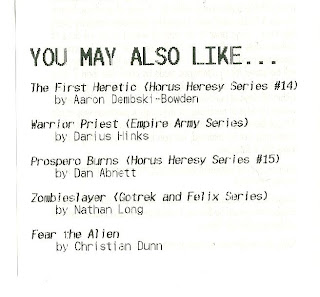 The paper said, “You May Also Like…” and listed five other books that were either set in the Warhammer Fantasy or Warhammer 40k line of books. Not only did it list the titles, but if the books belonged to a series, it also listed what series. This time around it recommended books from the Horus Heresy, the Empire Army, and the Gotrek and Felix series.

I thought it was a neat touch. It also reminded me I’m a few books behind when it comes to Gotrek and Felix.
Posted by Ken O at 10:29 AM