It’s Hangover Thursday, how’s your head? I had a couple of Fat Tires last night while rolling dice with friends but it looks like most of my drinking this week will be reserved for the weekend. I haven’t gotten out to my local bars lately and I miss them. It seems they miss me too, one of them sent me an email with a coupon for a free draft beer. And draft beer is what we are talking about today. 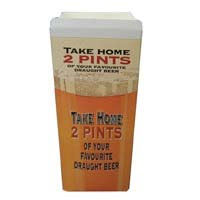 I’m going to apologize in advance to any readers in England; this is probably going to sound like old news to you. I’m going to set up a little scene here. You’re out with some friends (including a designated driver), but you got a late start. Everyone finally shows up to the bar at 11 or 12. You hang out for a few hours and before you know it, it’s last call. Now you’re still in a drinking mood, but if it is last call then all the other stores that sell beer are going to be closing too. Wouldn’t it be nice if you could order a couple drinks to go? That is where the beer carton comes in. 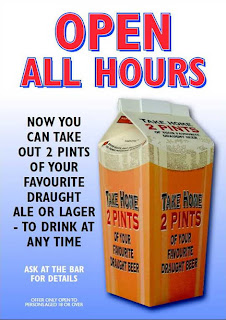 The beer carton holds two pints of beer in a milk style carton. How amazing is that? You’re friendly bartender fills it up with your favorite brew, seals it up, and you are on your merry way. I think it is a fantastic idea. Even though I know a few bars that will sell you a six pack when they are closing I think it would be a hard sell in the states. What do you think? Would you drink beer out of a carton?