Happy Flash Friday everyone! I came home from work yesterday to find the package that F’ing Monkey co-writer Brandon has sent me had finally arrived. I didn’t know what it was going to be; just that he was sending me a package. There were two items inside the box, one of them may be the subject of a later article, but the second item was so good that it had to be talked about immediately. That item is a vintage Flash mask. 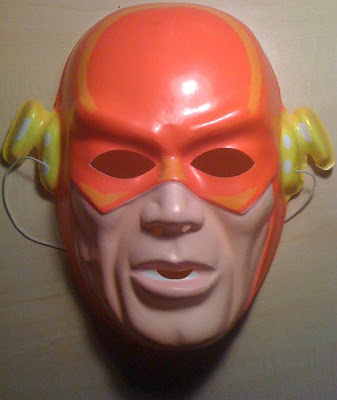 Brandon found this in a Texas party store that was going out of business. This thing brings back thoughts of being a little kid when almost any store bought costume consisted of one of these plastic half masks and what was basically a smock with the character’s picture on your chest. What is surprising is the amount of paint used on the mask. The white on the ear wings isn’t caused by wear and tear, it’s painted on. 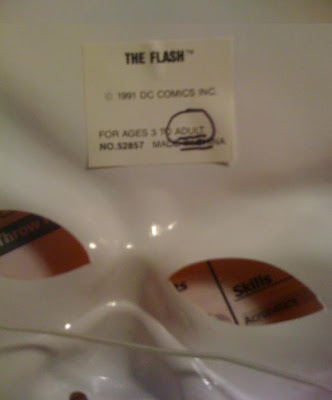 The sticker on the inside of the mask gives some insight on when it was made at least. Besides saying that it is for ages “3 to Adult” it gives us a date of 1991. So this was probably produced for the Flash television show. Was this mask really sitting on a shelf in a part store since 1991? With the store closed, it is impossible to tell. 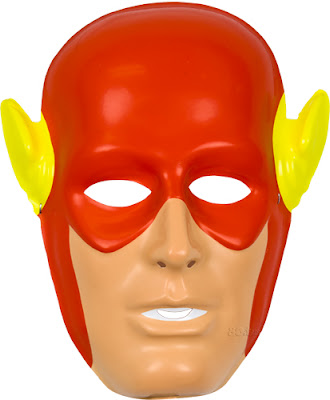 One of the most surprising things is that a version of this mask is still available and can be purchased at online stores like 80stees. I thought the new masks used the same mold as the one I have, but looking at the ear wings, they seem to point in a different direction. The paint applications are completely different too, the current mask looses a lot of the detail that the vintage one has. 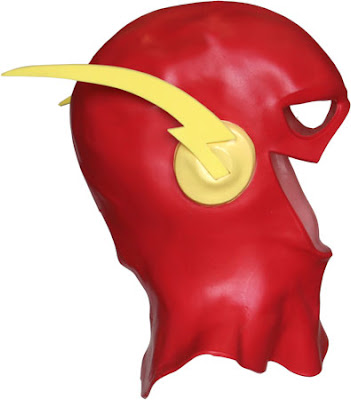 All this mask talk/research reminds me that I need to order the Flash cowl/mask at some point. I’ll have to find some way to display it though. I suppose I could put it on one of those Styrofoam heads that hairdressers use for wigs. It’d be kind of creepy to have a bunch of superhero heads displayed in a room like you were some kind of big game hunter themed super villain. “Ah yes, I bagged the red one just outside Keystone City.”

That’s it for the mask talk this week. Today’s post was originally going to be about the fact that the guys over at ComicTwart had named the Flash as the character of the week. Go check out some artistic awesomeness that happened over there.
Posted by Ken O at 7:35 AM