Yesterday when we talked about the awesome Games Workshop store in Oak Park I said that we weren’t done talking about Warhammer 40K. Today we’re going to talk about two different games set in the Warhammer 40K universe. The first game is currently available on Xbox Live and the Playstation Network. The second game is the Space Marine game coming to stores on September 6th.

In Kill Team you are a lone Space Marine sent to disable an Ork spaceship before it reaches an Imperial Forge World. It’s a simple top down shooter that adds some replay value by adding different classes of Space Marines to play. As you play through you unlock different bonuses to add to your marine like more health or quicker special ability recharge. The game does offer a few marine chapters to choose from, but the change there is completely cosmetic. Kill Team does have co-op, but it is local co-op only.

It’s a fun game, but a short one. The carnage is glourious.  I’d recommend it for people who already like the Warhammer properties but would give it a pass to those who aren’t already fans. There is another bonus if you plan on picking up Space Marine, playing through a mission in Kill Team will also unlock a Power Sword for you to use in the later game. 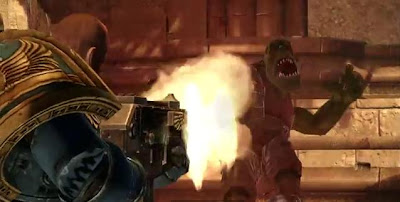 Space Marine is a third-person shooter where you’ll control Captain Titus of the Ultramarines as he tries to hold off armies of Orks and Chaos Marines. It seems you’re efforts in Kill Team weren’t completely successful because the Orks reached the Forge World and are trying to steal a Titan. The action looks completely over the top. There is no cover and you’ll regain health from stringing together kill combos. The number of weapons you’ll be able to pick up just looks ridiculous and wonderful. 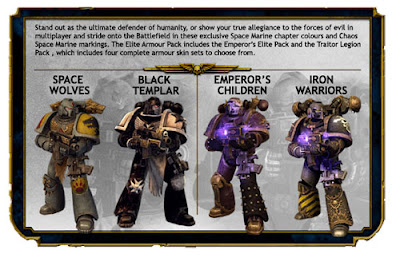 We can’t talk about any upcoming game without talking about the pre-order bonuses that are coming with it. Emperor’s Elite Pack is from Gamestop and includes Space Wolf and Black Templar armor skins. Best Buy has the Traitor Legion pack including the Iron Warriors and Emperor’s Children. Amazon has a Golden Chainsword. Walmart has a golden bolter. Pre-order on Steam and get a Blood Ravens skin.
So yeah, I’m excited. Fear no enemy, fear no death.
Posted by Ken O at 11:01 AM