Brandon started the week off complaining about the news that Eureka has been canceled. I’ve been a big fan of the show since the first season so I was pretty bummed out by the news too. Instead of lingering on the death of a beloved show though, I’m going to help the channel out and pitch them three shows for their channel that would be guaranteed to bring an audience. These are million dollar ideas that I’m giving away for free. 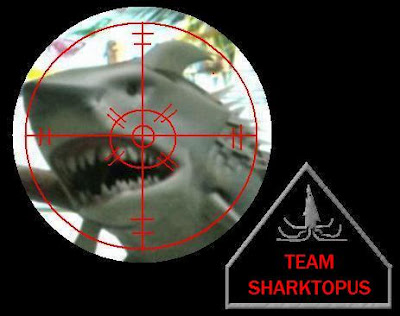 First up, is Team Sharktopus. An elite government team has been put together to take down the deadly shark/octopus hybrid. Thrown together are Michael Allen (the eccentric group leader who directs action back at base), Kevin Reynolds (the hot headed field leader), Kelley Dunn the total ass kicking female who has always been overlooked for being female, and Curtis Clark (the wacky tech guy). Team Sharktopus would travel to a different city every week and stumble across other problems that need to be fixed as they hunt the monster shark. For instance when they travel to Monkey Harbor they cross paths with the town’s corrupt sheriff and eventually have to free the town from his grip, but in doing so Sharktopus gets away again. 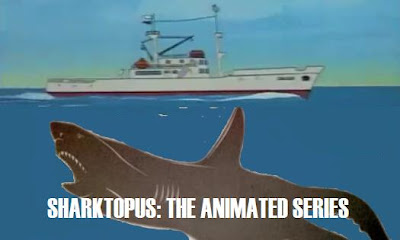 Then we have Sharktopus: The Animated series. Professor Eric Green is the top Monster-ologist in the world. To better study monsters of all kinds he builds a mobile laboratory in a state of the art super yacht. Green staffs the yacht with boat captain and security expert Ted Hicks, fellow scientist Brenda Quinn, and Green’s teenage son Jeff. During their first outing Jeff saves Sharktopus from a dangerous fishing net and the two become fast friends. Each week the team would find a new monster, only to be saved by Sharktopus because of its friendship with Jeff. 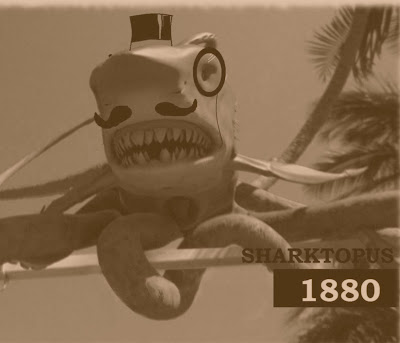 Finally we have Sharktopus 1880. Set in Victorian England, Sir Reginald J. Sharktopus is the most renowned detective in the world. When the police are stuck with an unsolvable case, they come to Sharktopus. Sir Reginald is usually helped on his cases by his mute manservant Manuel and a trained seagull named Pancho. The reoccurring criminal mastermind Mortimer Pennybottom Esquire would constantly be leaving taunting clues for Sharktopus to find and their rivalry would be the subplot of the series.

There you go Syfy. The ball is in your court. I’ve given you ratings gold, what you do with it is up to you.