Happy Flash Friday everyone! Today we’re going to be crossing Flash Friday with one of my favorite reoccurring features, Tales from the Brain Jar. In case you missed any of the earlier entries, I’ve been having pieces added to my brain jar themed sketchbook since 2004. Today’s entry is posted on Flash Friday because the picture is of Bart Allen back when he was Impulse.

This piece was done during the 2009 Megacon. If you can’t tell just from the looks of it, it was done by the incredible Humberto Ramos. I was very excited about this sketch, when I picture Impulse in my mind it is Ramos’ version that I see. While talking with him that day he said he was embarrassed that so many people come up to him thinking that he designed Impulse with Mark Waid, when Mike Wieringo was actually the artist behind the character. 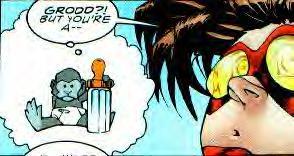 For those not familiar with Bart when he was still Impulse, one of the things that made him stand out is that he never had text in any of his thought bubbles, it was always pictures. It was very different and one of those little quirks that I knew I had to have included in my sketch. I don’t think it’s bragging to say that the sketch came out amazing. I got to talk a lot about his run on Impulse and his thoughts on the character in general. We also talked about the Dark Horse mini-series Revelations, but that is a topic for another day.
Posted by Ken O at 10:40 AM