Starman Week marches on! So far we’ve covered the books, the mini-series, and shared some stories about convention sketches. Now it’s time to talk toys! DC Direct did make a Jack Knight figure but it won’t be in today’s article. When the DC Universe Jack came out I considered it an upgrade and packed up the DC Direct version somewhere in my closet. I suppose there is a certain irony to a character who is a collectables dealer being turned into a collectable himself. 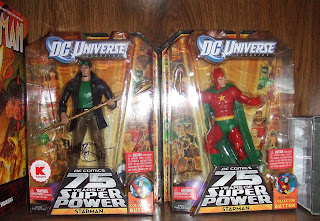 DC Universe Classics did a version of Jack and one of his father, the Golden Age Starman. As you can see by the sticker, they were part of the line that debuted at K-Mart before showing up at other stores. I had looked all over for the Jack figure, but couldn’t find him on the store pegs. I ended up buying him for a little bit of a markup at Heroes last year. The bonus to buying him there was I got the package signed by Tony Harris. 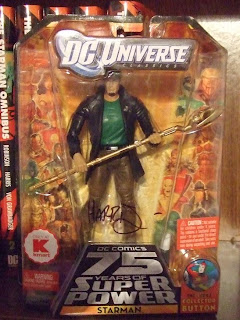 This week is really turning into a love letter to Tony Harris isn’t it? I like to open most of my figures, even if they are just going in a display. That way I can make sure I like the pose they are in and things like that. Well, once you get the packaging signed you’ve pretty much decided to leave the figure in or carefully cut out the back of the packaging. I decided to just leave him in there. 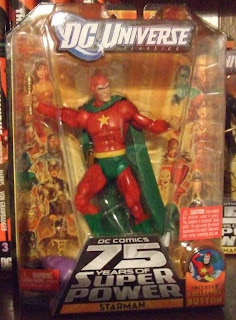 I wasn’t sure I was going to buy the Ted Knight figure. It was one of those situations where buying one item snowballs into buying another just to have a complete set. I found him in a store one day and debated with myself whether or not to pick him up. Obviously the collector in me won out. Just because I already had Jack, Ted stays in his package also. 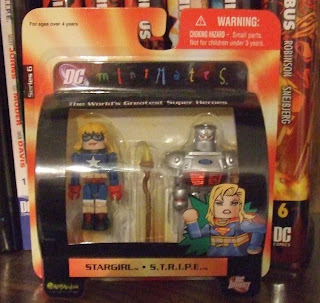 There is a DC Universe Stargirl figure. I haven’t picked her up yet. I’ve seen her in the stores and had the same debate I had with the Ted Knight, except this time my diminishing display space won out. I do have this fantastic Stargirl and S.T.R.I.P.E. minimates set. I haven’t really covered Stargirl this week; she’ll have to wait until I decide to do another week dedicated to the series. I don’t know why I’ve kept them in package, but most the minimates I’ve purchased remain unopened.

That’s it for the figures, check back tomorrow for even more Starman!
Posted by Ken O at 10:12 AM