Since the original Star Wars movies were re-released in theaters there has been a steady stream of Star Wars merchandise. With the continued re-releases and new properties like the cartoons, I don’t know that I’ll ever see a time in my life where Star Wars isn’t represented on the toy aisle. It’s when Star Wars moves away from the toy aisle that things start to get a little stranger. 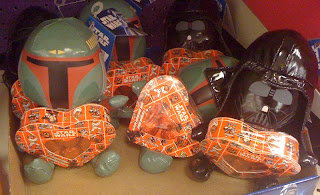 I had a hard time trying to decided what order to put these in. I wanted to put the strangest thing last, but that is hard to do. In fact the people who have already seen these couldn’t agree which was the strangest. Starting out our look at Star Wars Valentines are these chibi plush versions of Boba and Vader. Both of them are holding a small package of chocolate hearts. This one looks like they just packaged two existing items. The plush probably existed well before this. Someone just bundled them together for the holiday. 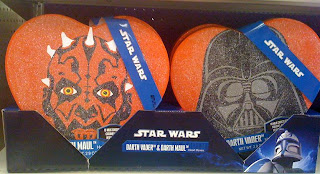 Next up are full sized candy boxes, with either Darth Vader or Darth Maul’s face on them. I get the first time. A kid likes the plush and they get a kid sized box of chocolates. These suckers with their strange glitter frosted tops seem like they would be a little big to give to kid. Who exactly is this aimed at? And why Darth Maul? I know Phantom Menace is being rereleased in 3-D but is really the spokes person you want for this? Everyone knows that Kit Fisto is the real Star Wars embodiment of Valentine’s Day. 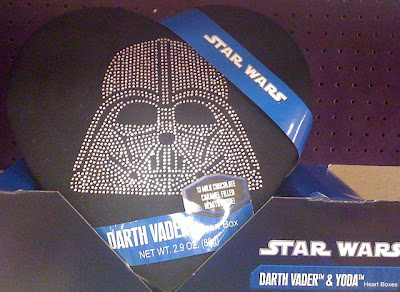 Frosted glitter wasn’t the only variety of chocolate boxes though. They also had rhinestone. This thing blew me away. Done in a tasteful black, we get a lovely rhinestone version of Darth Vader. I almost bought this. The sheer strangeness of it stopped me in my tracks. Just an all black heart shaped box was enough to stand out. Someone is buying these things though, because there is also a version that has Yoda on it. The Yoda version was already sold out.
Posted by Ken O at 10:20 AM