Why I Love the Old Republic

It is no surprise at this point that I’m still waste deep in the MMO Star Wars: The Old Republic. When my day has finally wound down I usually jump on for an hour or more before I head to bed. The game isn’t perfect. It does have issues, but there are other things in it that make me smile. I’ve played Star Wars video games before, but there is something about this one that has made me grin numerous times just by including little things. 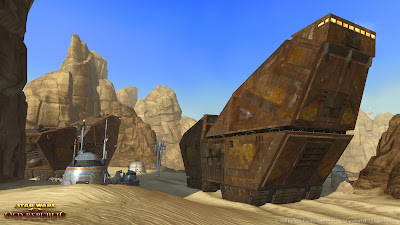 Tatoonie is a perfect example. The maps are spread out and mostly sand dunes, quite fitting of the planet. I’ve read where other players have complained because it is so spread out, but to me it feels perfect. I want Tatoonie to be spread out. I grinned like an idiot when I saw my first Sandcrawler. I was genuinely excited the first time I saw a herd of Banthas. Hoth was much the same. Wampas, Tauntauns, and Ortolans? I wanted to replace all of my crew with little blue elephant people. 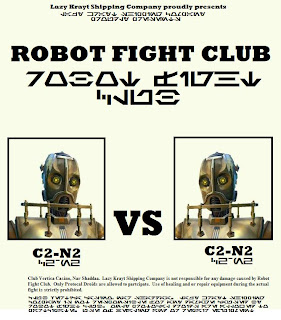 We’ve also discovered a game within the game. No, it’s not Pazaak. If it was Pazaak I wouldn’t be typing updates to the website, I’d be playing Pazaak. It’s Droid Boxing! Robot Fight Club! Summon your ship’s droid, disable its healing powers, duel another player, target the other player’s droid, and then tell your droid to attack the other one. It’s serious fun for the whole family!!
Posted by Ken O at 10:37 AM