Happy Flash Friday everyone!! After a month off, Flash Friday is back and ready to go. I stumbled on the subject of today’s Flash Friday while I was walking down the decimated toy isles in my local Target. It was about a week after Christmas, so the shelves were still pretty bare looking. They had just installed the new decorations to the shelves, so that was a neat surprise. And then I saw it. 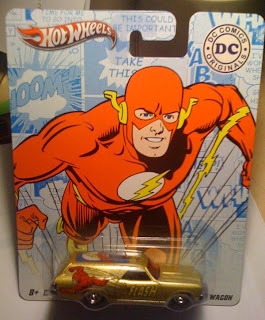 The Hot Wheels DC Comics Original Flash ’70 Chevelle “SS” Wagon. That is a giant name for a tiny toy car. I have a fascination with toy cars that slap a Flash design onto them, but this is the first one I’ve actually purchased. In fact I’ve talked about Flash and cars before; you can go back and read that HERE. 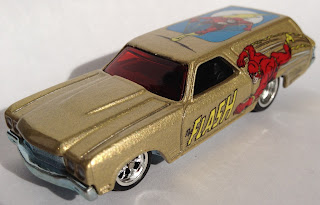 There are some strange choices on the Flash car. I guess they went with a wagon to give them more space to paint the Flash figure. The majority of the car is gold and the top image is done in blue. I was initially confused. Why isn’t it red? Then I thought if the car was red, then the Flash would blend in. So now I’m stuck wondering why they didn’t go with a darker color. The packaging on this line is sharp. I’ll probably never take the car out. 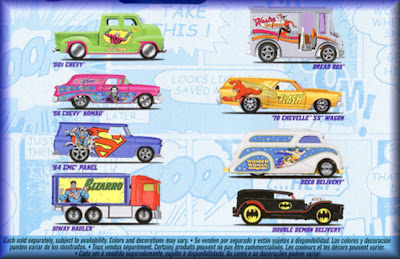 The Flash isn’t alone in this line and after seeing what characters got what vehicles the Flash Wagon doesn’t sound so strange. Superman, Batman, and Wonder Woman were obvious editions. Joker and Lex Luther are also pretty normal choices. Bizarro showing up in his truck is a bit of a surprise. Harley Quinn is driving a bread truck. A bread truck. That is strange even for the criminally insane.