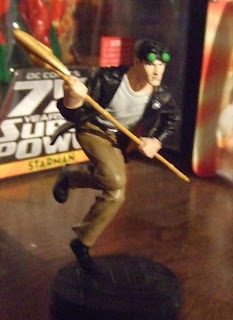 We’re starting off with the Eaglemoss Starman. I’ve already talked about how much I love the Eaglemoss line in my numerous reviews of the Flash related releases. Hand painted lead figures. They aren’t very large, but that makes them affordable and easy to display. They are quickly my favorite way to get a collectable of a character I like. As you can see Jack looks fantastic. 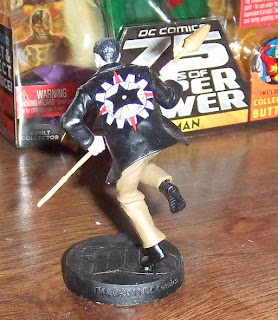 I was even more impressed with the piece when I got a look at the back of his jacket. The Starman symbol is a little more complex than most of the designs I’ve seen recreated on the Eaglemoss stuff so far. I think the picture speaks for itself. Unfortunately there isn’t a Golden Age Starman in this line. The good news is that they are adding a Stargirl though, she was just recently announced. 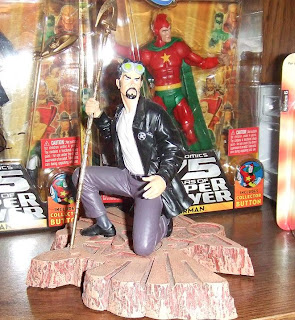 Then we have the statue DC Direct released in 1999. Sculpted by Tim Buckner and based on Tony Harris’ designs I’ve had this piece in my collection for a long time. The pose makes it an interesting piece. The base on the statue is sized normally but since Jack is kneeling it takes up much less space than if he was standing in some kind of dynamic action shot. It is cold cast porcelain, so it has some heft to it. 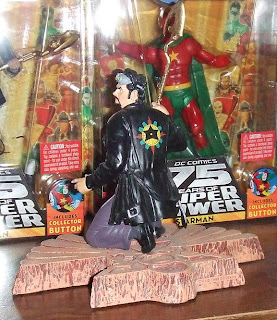 The tip of the staff is a separate piece, which makes it much easier to transport. It fits into the staff snuggly though; I’ve never had any issues with it falling out. The Starman zodiac is also nicely painted on the back of Jack’s jacket on this piece too. Despite it being older, you can find this popping up on eBay pretty frequently.

That’s it for Starman week. I’d like to do it again some time. As always there is a “Contact Us” button on the right hand side if you have any suggestions, complaints, etc.
Posted by Ken O at 10:46 AM