Flash Friday: I Slept With the Rogues

Happy Flash Friday everyone! Lia over at Speed Force wrote a fantastic piece on her love for the Top. It got me thinking about my own love for some third and fourth string characters, it also got me thinking about just when I started liking the Flash’s Rogues. I think I’ve figured it out. See I used to sleep with them. Shocking I know. 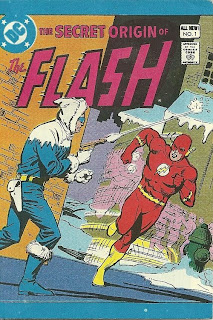 Before jumping to the Rogues I want to quickly go over my discovery of the Flash. While there is more information about it HERE, my fascination of the Flash started with a tiny comic that retold his origin. There was something magical in those pages and I was hooked from an early age. That book does feature the Rogues, but it is extremely brief. You see maybe a panel of each one getting defeated by the Flash. 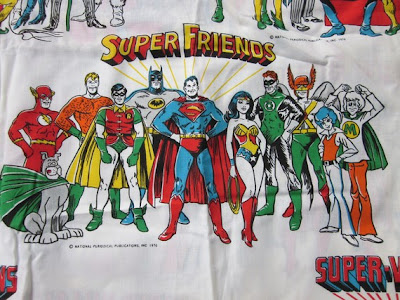 Fast forward to the Superfriends. I was a superhero junkie as a kid; I had toys, underroos, and even sheets. The sheet set I had is pictured above, it was a white sheet that repeated the picture of the hero and the villain line up. Even as a kid I remember knowing that the Flash’s lightning bolt was pointing the wrong direction. The pillow case even had a larger version of the picture; the heroes on ones side and the villains on the other. 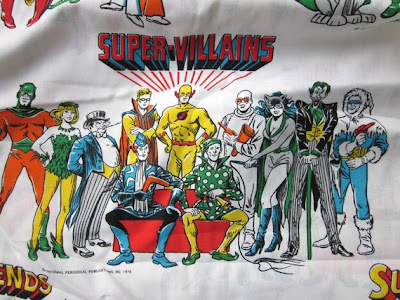 The villain portrait was especially interesting to me as a kid; I remember always wanting to look at that side. As an older comic fan I’m amazed by how most of the characters used are Rogues. Think about it. There are four Bat villains, seven Flash villains, and no villains from any other villain. Lex Luthor? A total no show. Black Manta? I guess he wasn’t available. Cheetha? She didn’t get the memo. Sinestro? Maybe he was off world. Even Gentleman Ghost was too busy I guess. 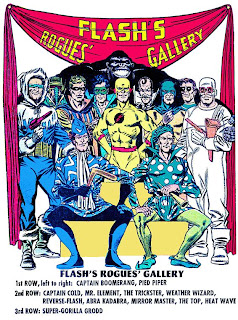 Now I realize where most of the image they used is from. Still, it is strange that the core of the super villain piece was taken from a pin-up of the Flash’s villains. I have to admit that during this time, most of who I liked or disliked was based 100% on how they looked on the pillow case. I thought Captain Cold was awesome and that Heatwave looked like a dork. And that’s the story of how I used to sleep with the Rogues.
Posted by Ken O at 10:33 AM