It’s Hangover Thursday, how’s your head? I’d suppose most people are taking their drinking easy this week in preparation for Super Bowl parties. Personally I’ve had a couple Black and Tans the past few days. I think having two a night would improve my overall view of the world. Things tend to seem better after two beers. Today’s Hangover Thursday is about Sidekicks. And while I could write numerous articles on my love for Short Round, I’m not talking about that kind of sidekick. 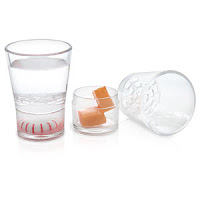 Sidekicks are shot glasses with a hidden compartment! Well, I guess it isn’t actually hidden since they are clear. The bottom compartment unscrews from the rest of the glass allowing you to drop in candy, peppers, or anything else you want to make your drinks more interesting. The bottom of the top portion is slotted, so any liquid you pour in will mix with the bottom compartment. 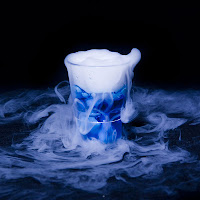 The glasses are made of hard plastic and a four pack will run you 20 dollars over at Think Geek. Sure shots with peppermints in the bottom sound neat, but I think you’d have to let them sit for a while to really get the flavor. The (no pun intended) coolest usage would be to drop some dry ice in the shots. I could see that going over really well at a Halloween party.
Posted by Ken O at 11:21 AM