As someone who is about to be a father, I’m very excited by the amount of DC toys being released in the younger kid toy lines. With all the HeroWorld and Imaginext stuff even the smallest Batman fan is going to be happy. I guess Fisher Price are banking on the Green Lantern cartoon getting popular, because the Green Lantern is getting a whole line of HeroWorld toys. Some of them are already on the shelves of your local Toys R Us. 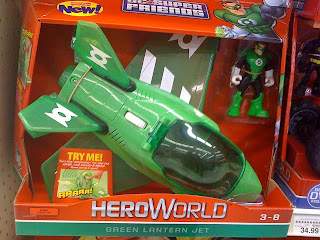 Starting with the biggest of the sets I found is the Green Lantern Jet. It comes with a Hal Jordan figure. The jet has an “actionator” dial that pops out the wings, makes sounds, and lights up. It also has landing gear, shoots a missile, and has a flip down “flight grip”. I love the toys that actually come with handles like that. It was one of the reasons the Captain Power ships were so cool. Since this is a bigger set, it comes with the largest price tag. Flying around your living room in the Green Lantern Jet will cost you 35 dollars. 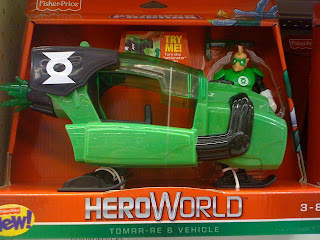 Tomar-Re comes with a Turbo Sled. The Turbo Sled also has an “actionator” dial. It doesn’t do quite as much as the jet though. Turing this one will spin the turbo booster at the back of the Sled. The Sled also has a clear green missile that fires from the front of it. Almost half the cost of the jet you can get Tomar-Re and his Sled for 16 dollars.  Still, let's be honest here, there is a Tomar-Re toy for children.  That is awesome. 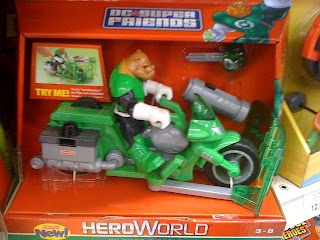 You can’t have Green Lantern toys without including Kilowog. The Wog comes with a motorcycle that’s ready for battle. There is a cannon mounted on the front of the bike that shoots out a clear green fist. Turn the “actionator” and two clear green shields pop out from the sides of the bike and cover the front end. I thought it was the coolest design of the three. Wog and his hog have the same price point as Tomar-Re, so if you want to take him home it’ll cost you 16 dollars. 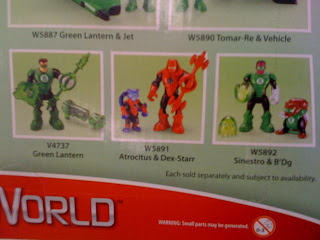 Finally I took a picture of the back of the packaging. I didn’t see these single figures anywhere, but I think it is a pretty interesting line up. I’m sure plenty of adult collectors will be grabbing these sets. Atrocitus and Sinestro may be cool, but obviously the highlights of this line are the Dex-Starr and the B’Dg.
Posted by Ken O at 10:43 AM