It’s Hangover Thursday, how’s your head? So I have a confession. After being so sick on Friday and Saturday I went out to a friend’s birthday bash on Sunday night and drank. I didn’t drink as much as I could have, but probably drank more than I needed to. During that night I made a trip with someone back to the liquor store. I had needed to pick up more beer and the other person involved was picking up some things they needed. It was at this store that I saw it, NutLiquor. 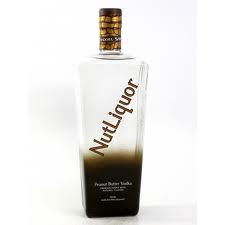 Okay, so before we get any further I should explain what it is. NutLiquor is a 69 Proof, peanut butter flavored vodka made by Pandora Spirits. Their website says it is meant to taste like the center of a peanut butter cup. It is also apparently safe to drink if you have peanut allergies. It is blended to be drunk neat, so it is not supposed to have any harsh aftertaste.

I did not buy NutLiquor when I saw it. I regret that now. I’m going to have to buy a bottle for the next party I go to. There is a strange curiosity about it. I never wanted to drink peanut butter, but now I want to try it. Of course there is the name. I’m not even going to make the nut licker jokes today; I’ll let you come up with your own.
Posted by Ken O at 10:16 AM