Happy Flash Friday everyone! A while back I was excited because the DC Super-Pets line of books had finally released a Flash-centric book. The Terrific Whatzit stars in Salamander Smackdown, a book written by John Sazaklis and illustrated by Art Baltazar. We got super lucky, because John Sazaklis was kind enough to answer a few questions about Whatzit and the DC Super-Pets in general. 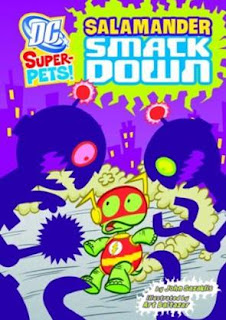 K: In the Super-Pet line a lot of characters already had obvious pets. Whatzit is a little different since he existed in DC’s old Funny Animal books and wasn’t really a pet. Were you given any source material on the character?

JS: I wasn't given much source material, and the reference available was pretty limited. Art created a pretty fun, silly, amazing world with the Tiny Titans. Many of these super-pets, like the Bat-Cow, appeared as visual gags that now have their own books. My direction for Whatzit was to write him as an extension of the Flash (in personality and abilities) and make him fit in this new world. 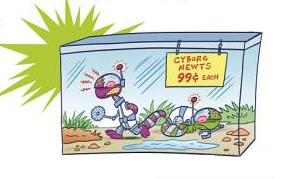 K:Were Whatzit’s villains always going to be newts? Since they are new characters, how much (if any) input did you have in their creation?

JS: In some books I've had the freedom to create original villains or use some obscure characters provided by DC. In this case, I knew the villains were going to be newts but had no information on them since they were created solely for this book. Their personalities were greatly inspired by Pinky and the Brain. The Animaniacs have had an incredibly profound influence on my life. 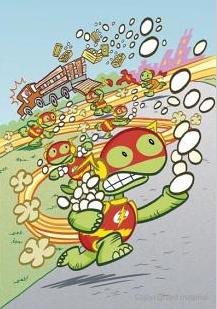 K: I know Barnyard Brainwash was recently released. Do you have more books coming out in the future? Should we expect more Whatzit?

JS: The first 3 books I authored were Royal Rodent Rescue, (where Streaky the Super-Cat faces off against Catwoman's cat, Rozz) The Hopping Hero (where Hoppy the Marvel Bunny battles a cuddlier version of Sobek the crocodile) and Salamander Smackdown. The second batch of books include Barnyard Brainwash, (where the aforementioned Bat-Cow matches wits with the Mad Catter) and Candy Store Caper (where Ace the Bat-Hound and his sidekick Robin Robin fight the Joker's hyenas, Crackers and Giggles). This summer keep your eyes peeled for three more stories featuring The Aqua-Pets, The Swamp-Pets, and the Atom's dog, Spot. I'm not sure if there is anymore Whatzit in the future, but one can only hope!! 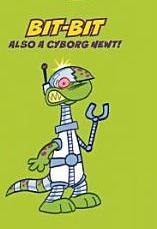 K: Through Harper Collins you’ve written for both Marvel and DC. How does that process different? 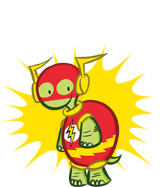 K: On your own blog you show off a lot of your sketches. Do you prefer writing or illustration?

JS: Thanks for noticing! I love both. Fact of the matter is; my brain moves A LOT faster than my hands. My overactive imagination helps me come up with ideas and writing is a great outlet for them. If I had the luxury of more free time, I would use that to illustrate as much as possible. 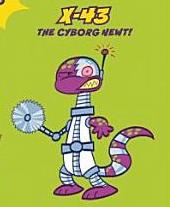 K: Seriously, thanks for taking the time to answer my questions. Is there anything else out on the shelves that you want people to know about?

JS: I'm working on a couple projects now, but release dates are, as of yet, unknown. Keep your eyes peeled for those Super-Pets books I mentioned at capstonekids.com as well as my personal updates at www.sazmagic.blogspot.com. Thanks so much!!
Posted by Ken O at 10:10 AM