Not wanting to get off the couch most of Friday and Saturday, I spent a lot of time with the Mass Effect 3 demo. This is no small demo; it has a lot to offer. We aren’t going to be talking about the two single player missions the demo lets you play though; today is all about the multiplayer. There is something strange in my head that make me very uncomfortable playing games with people I don’t know. I get very anxious and don’t end up enjoying it. So when multi-player was added to my favorite game I got very nervous. 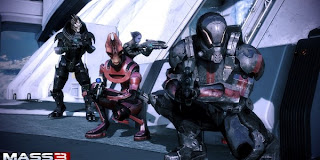 When you start the multiplayer you have to choose your class. They are the same classes you pick from when creating your Shephard. Each of those classes has 4 possible race selections, but only one of them for each class is unlocked at the beginning. The starting race for all of the classes is human, with some classes having the male unlocked and some having the female. Once you pick the class you can modify your armor color, name your character, change weapons, etc. 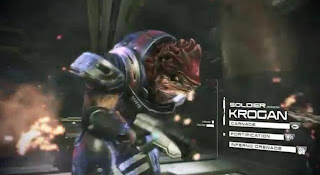 The missions you send your newly created character on can include up to three other players. For the missions I played there was only one other person playing with me. Waves of enemies come pretty fast. After the first two waves you’re given an objective. That objective might be kill specific enemies, stand in an area long enough to upload data, or interact with four different devices. Completing objectives means earning credits, more on those later. As you battle through the waves you can earn medals that are worth XP bonuses. Things like 5 headshots, or 25 assault rifle kills will pop up while you are playing. 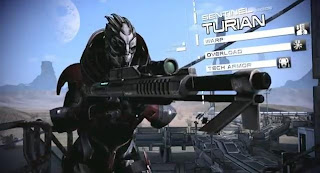 The credits you earn while playing unlock booster packs. Just like booster packs for card games, you don’t know what you are going to get. You might get an uncommon weapon modification or unlock a new playable race. Some of the items, like the medpacks, are one time use. While we were playing Brandon unlocked the Asari Adept, I wasn’t able to unlock any of the classes.  The Turian Sentinel has an amazing grouping of powers. 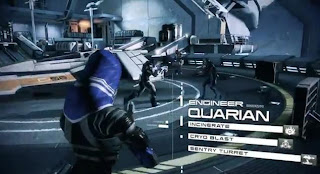 I was very wary of the multiplayer addition. Those fears are gone. As much as I’m looking forward to jumping neck deep in Mass Effect 3’s story, I’m also looking forward to tracking some friends down and meeting them in the multiplayer, I’ll be the Engineer screaming “Go for the eyes Boo!” when I launch my combat drone.
Posted by Ken O at 11:34 AM