Happy Flash Friday everyone! This week I ran across an interesting DC line that I hadn’t seen mentioned anywhere else. I was at the local Target wandering the isles again when I found the Batman end-cap. There were all sorts of ridiculous versions of Batman, but sitting under all of that were two boxes of superhero plush that I had never seen before. 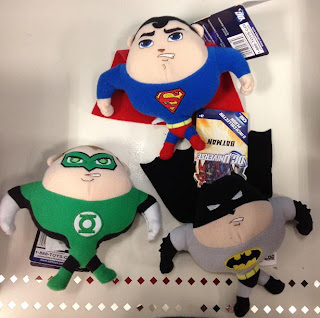 There were piles of these oddly shaped little guys. Odd shaped heads, tiny legs, and crazy sized chests. They almost look like they were supposed to be some kind of DC crossover with M&Ms, like the chocolates did with Star Wars a few years ago. They almost all look constipated too. 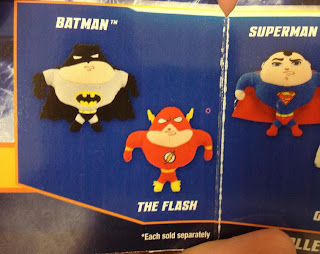 As usual, when I saw anything DC related I started looking to see if the Flash is included. To my surprise he is. The tag opens up and shows the entire 5 inch line; Batman, Superman, Green Lantern, and Flash. My Target had two boxes of these things and the only character sold out was the Flash. In hindsight I’m glad they were out of him. It would have been an instant buy, now I’m pretty sure I can live without this one. 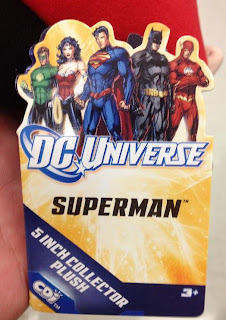 The other thing I find interesting is that both the tags and the box on these guys sport the New 52 character designs. I think it is the first time I’ve seen them used outside something that was meant for a comic book store. From the way DC talked when the New 52 launched I thought we'd be seeing this look everywhere.