Happy Flash Friday everyone! I’ve briefly mentioned that I don’t really care for the Big Bang Theory. I can’t seem to escape it though. For one, my wife loves the show. Now that it is syndicated it is hard to get away from. Wearing a Flash shirt out in public brings out the BBT fans too. We won’t discuss how many times I’ve been asked if Sheldon is my favorite character. Now you may be reading this and thinking, “Come on Ken, Sheldon isn’t that linked to the Flash.” 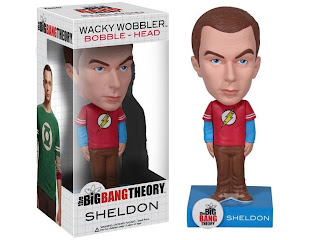 This is the Sheldon Wacky Wobbler Bobble-Head. I’ve never really understood bobble heads either, so this is like a double whammy. Despite wearing a Green Lantern shirt on the box, Sheldon is rocking the Flash shirt. As a side note, I don’t like bobble heads but I dig dashboard hula girls. It’s mostly the same concept, but the hula girl just seems cooler. 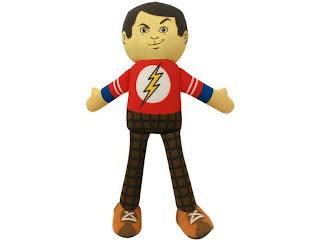 How about a Sheldon you can take to bed? Or turn into a Voodoo Doll. Yet again, that is unmistakably a Flash shirt. I feel bad for anyone actually buying this thing; the Flash shirt is the only thing that even gives you a clue that it’s supposed to be Sheldon. Even if I don't like the show, I can tell this is a pretty crappy product.  I've seen better likenesses from Claw Machine toys. 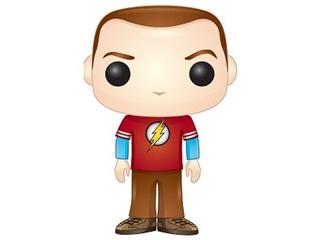 Eu Tu Funko? I’m a big fan of the Funko line. I have a Flash. I bought my wife a Beauty and the Beast. We have a plush Creature from the Black Lagoon. Of course their Sheldon is decked out in a Flash shirt. In their defense I think they are doing a couple different variants with different shirts. I couldn’t stay mad at Funko anyway. 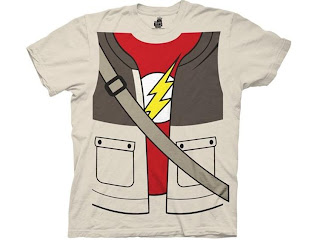 Just recently stores started showing Big Bang costume shirts. Guess what Sheldon’s shirt has on it? Underneath the straps and other shirts is a Flash symbol peeking out. I think I probably need to stop at this point and say I have nothing against the actor playing Sheldon. Jim Parsons had a great cameo in the latest Muppet movie. I’m just starting to miss the days when everyone got Flash and Flash Gordon mixed up.