Having lived in the shadow of Cinderella’s castle for a long time, I can be very critical of Disney. There are times they do something so brilliant, fun, or touching that I can’t find any fault in it. It looks like their new movie Wreck-It Ralph is going to be one of those things.


The trailer tells the story better than I do, but you have an old school video game villain tired or being the bad guy. Because of this he decides to leave his own game and goes in search of something new. It looks like a good number of video game genres are going to be touched on here. There are glimpses of racing games and shooters, but I’m sure there will be more than that.

Disney has also gone the Roger Rabbit route and filled the movie with cameos by other video game characters. Pac Man ghosts, Q-bert, Doctor Robotnik, Bowser, M. Bison, and Zangief are just the ones you see in the scenes that have been previewed. You know they are holding onto a couple big surprises to get the really big laughs. 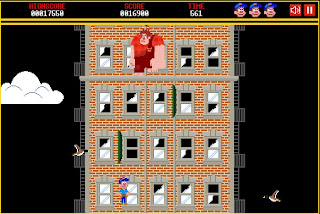 So far my favorite bit of marketing for the film is that Disney has released a flash game for Fix-it Felix Jr. This is the game that Wreck-It Ralph is the villain of and it is fully playable in all of its retro glory. You can check it out for yourself HERE. It’s pretty fantastic, but it lets you earn extra lives far easier than you could in the games actually created in the 80s.