Happy Flash Friday everyone! Once again we’re going to be looking at something I’ve had on my desk for a little while. I had really meant to have pictures ready and put his up last week, but real life had other plans. Today is all about the Eaglemoss Mirror Master. 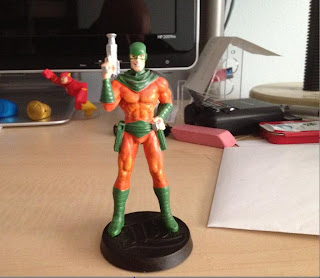 Eaglemoss produce action figure sized lead statues that are hand painted. The statue is shipped with a magazine that details the history of the subject. You get a couple pages of their most known stories, information on their friends and enemies, and other things like that. It isn’t a lot, but it is very nicely put together. 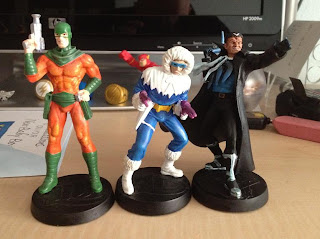 I’m always happy to have another Rogue to add to the group, so Mirror Master was an instant buy. The proportions are a little wonky but I think the three still look pretty good together. Mirror Master’s paint job looks like it was given some kind of shading wash; it makes the suit look a dirty. It also saves the costume from being super bright. I think it is a pretty good look for him. 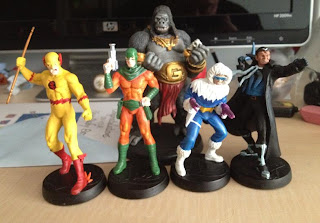 There is a reason you see a lot of Eaglemoss on That F’ing Monkey. They and Action League are my two favorite merchandise lines. I got bored of the action figure lines. DC Direct, DC Universe, Infinite Heroes, and whatever else all do the same characters. Sure the scale and quality differ, but you end up with 15 action figures of the same figure. I think the mini statues offer something a little different while still being around “action figure prices.” 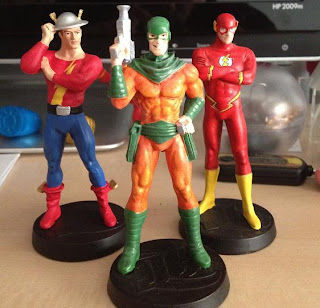 I like to think in this picture that Mirror Master is gloating about what a criminal genius he is without knowing that he has two Flashes behind his back. 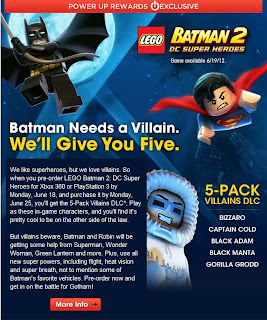 Last but not least, it has finally been announced how to get the Lego Villians Pack in Lego Batman 2. Gamestop is giving it to all of its Powerup Rewards members that pre-order the game. So not only will get the Hero pack, but you’ll also get the Villain one. I love the Lego games. It doesn’t take me long to finish them, so this was not going to be a day one buy. But that Captain Cold may make me change my mind.