You become pretty numb to theme parks when you grow up in Orlando. Every once in a while there is an announcement that gets you excited. Halloween Horror Nights at Universal Studios is always interesting and some of their themes can be pretty fun. This year they’ve already announced house based on the Walking Dead and on the video game series Silent Hill. Now they’ve announced a house based on Alice Cooper. 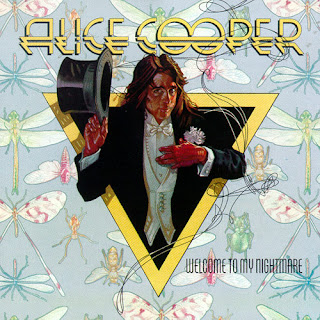 The Orlando Universal studios are going to have a house called Alice Cooper’s Welcome to My Nightmare. The Halloween Horror Night’s website describes it like this: “Journey into legendary rocker Alice Cooper’s twisted mind and witness the natural melding of horror and Cooper’s four decades-long career. Here you will follow Steven, the iconic character from many of Cooper’s works, as you come face to face with a myriad of tormentors who threaten an already-decaying sense of sanity.” 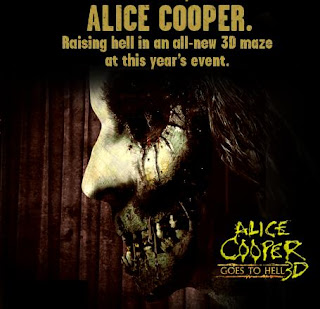 Last year the Los Angeles Horror Nights already had an Alice Cooper house. So it sounds like Orlando is getting a version of that one. Los Angeles is getting a new Cooper maze this year called Alice Cooper Goes to Hell. I’ve been an fan of Alice Cooper since middle school. I’m thrilled that such an horror themed entertainer is still going strong. This kind of news just makes me happy.
Posted by Ken O at 8:00 AM