The Journey of Thall Faceshooter, Part 2

I’ve been buried in overtime this week, but somehow I still managed to put some time in to playing Fallout 3. Thall continues to search for his father and has become a bit of a white knight; except for that whole shooting people in the face thing. What follows are my notes and thoughts on what was happening. If you’re like me and it took you 4 years to get around to playing Fallout 3 there are some spoilers below. 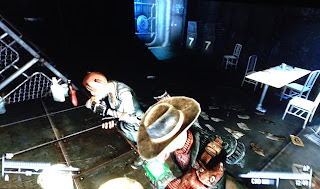 Searching for a group of wanna be vampires called the Family. When I find the man they have guarding the entrance he quickly threatens me, opens the gate so I can come in, and then wanders over to a cot and falls asleep.

If only I was taking video, I could have started a new internet phenomenon: 3 vicious dogs, 1 grenade.

Killing raiders with a grenade only to find a brand new grenade on them when you loot the body; it feels pretty good. 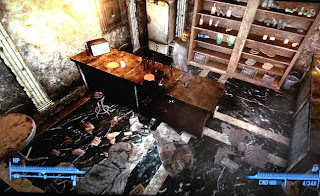 I spend a lot of time in bars.  It's kind of like real life.

I walked out of a door only to have a mercenary group attack me for doing good deeds. Didn’t they realize all my good deeds involved shooting people in the face? So I shot them in the face. 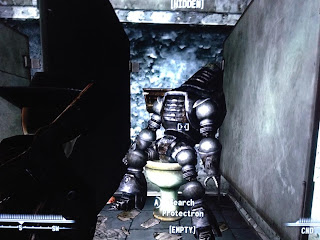 Found a robot on the toilet. Apparently he’s finished because his status shows as empty.

In the robot factory I reprogrammed the robots to destroy all the giant mole rats and rad-roaches. I forgot to tell the robots not to attack me. Ouch.

Saw a caravan trader. He ran like crazy with his guard running after him. Finally caught up to him and he was happy to trade. It was like he totally forgot about running around like a chicken with its head cut off for 5 minutes. 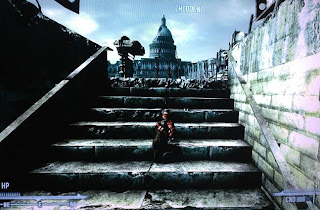 I found a building full of Super Mutants. I snipe one of the second floor. I start ambushing the rest with my trusty combat shotgun. Eight more Super Mutants lose their faces. The ninth is up on the second floor yelling about how I’m scared. I tried to be intimidated, but standing knee deep in dead Super Mutant made me feel like a bad ass.

I meet the radio DJ 3 Dog. Unlike most current day DJs 3 Dog doesn’t look fat, balding, or far older than he sounds on the radio. I find this the most unrealistic thing in the game.

Two get to 3 Dog I had to cross a plaza where Super Mutants and the Brotherhood of Steel are fighting. I lay a trap. Landmines are set up, I snipe one Super Mutant, and the whole group come running for me. The four landmines blow up, I throw a grenade into the mix, and only body parts are left. Later 3 Dog tells me that the Brotherhood saved my skin out there. He doesn’t know how close he came to a face shooting.

I come back home to Megaton city to sell some stuff and stretch out on my bed. An adoring town’s person runs up to hand me some snack cakes to thank me for doing what I do (face shooting evil). I accept the cakes…and I’m over encumbered. Fuck.