The Journey of Thall Faceshooter, Part 1

We’re going to try something a little different here at That F’ing Monkey. Fallout 3 was released in 2008 to rave reviews. Even though I wanted to, I never got around to playing it. Luckily for me I wound up in a situation where I have some free time and a shortage of money for video games. Luckily Fallout’s Game of the Year edition contains all of the games DLC and only cost 20 dollars. I’m going to be discussing my play through below, so there are spoilers for a 4 year old game below. You’ve been warned. 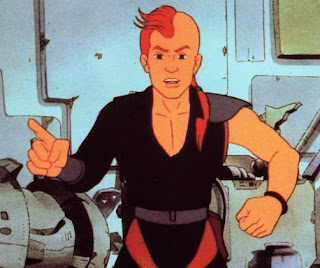 The game starts with your birth and then you’re dropped into the character creator. I spend a lot of time in character creators and this one was no different. When I got to hair styles I saw one that struck an old memory. Suddenly my whole idea for playing had changed. I had to go back and start the character creator over but I was going to play the Fallout version of Thall Joben. Thall was a character from the old Star Wars Droids cartoon. 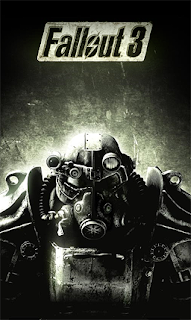 Day One of Playing:
Took the GOAT (General Occupational Aptitude Test) and got placed as the Vault’s tattoo artist! I actually got this result without looking at a guide. I was pretty psyched.

Hmm. I don’t think I can actually get tattoos. I suddenly want a mini-game where I ink people. None of that happens.

Guards are after me. I turn the corner to see a guard getting attacked by rad-roaches. Trying to be heroic I shoot the rad roaches out of the air. Even after saving his life, the guard comes after me.

Still trying to be the good guy, I want to disable the guard not kill him. I put a bullet in each leg. He dies anyway. From now on I’ll just shoot them in the face.

Escaped the Vault, headed to the first town.

Shady wants me to blow up the town. I tell the sheriff and the sheriff confronts Shady. Shady shoots the sheriff in the back. I shoot Shady 7 times in the face before he dies. Holy fuck bullets either got really weak in the future or people’s skulls got really dense.

After playing for a couple of hours I finally figured out how to turn on my flashlight. Fuck. 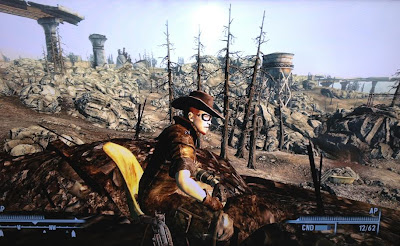 Day Two of Playing:
Met with Crazy. She wants me to go to the supermarket. There are ghouls hanging out in front of the place. My first instinct is to shoot them in the face. Instead we talk around their hobo fire for a few minutes. Once inside the supermarket I shoot a bunch of Raiders in their faces.

Back in town I have some money finally. Meet the local prostitute. I consider her services, but she would pretty much cost me half of my savings. Maybe I’ll put a little aside after each mission A layway for a lay, it seems appropriate.

Crazy sends me out into a mine field. Ran into some more Raiders. Shot them in the face.

Slept in an abandoned house after looting it. The owners’ skeletons are in there, they’ve been long dead. There is a dead Raider in the living room though. He looks fresh. No idea what killed him. Slept in the house anyway, it was creepy as fuck though.

Gave Crazy a landmine I got out of the supermarket and told her it came from the minefield. Fuck her.

That’s it for the first two nights I got to sit down with the game. There may be more adventures of Thall Faceshooter next week.