Guy Harvey is a well know wildlife artist and conservationist. While he was filming a blue marlin he got surprised by a giant mako shark. Make sure you have your speakers on for this one, the audio alone is worth it.


I love how the mako turns its head to look at him. It’s an absolutely beautiful shark. I don’t think I’ve ever seen another video that properly showed just how fact the mako is. This video nails it. Harvey estimates that the shark was around 10 feet long and 600 pounds. 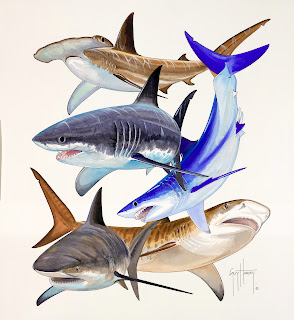 Shark Week is coming soon and after reading some of the new shows coming I’m saddened to say that from what I’ve seen announced it looks like it is going to be another great white fest. The above video shows that a shark doesn’t have to be a great white to me interesting. I’m still hoping Discovery will be showing us lots of tiger, mako, and hammer heads; but I think we’ll just get jumping great whites again. Jumping great whites are exciting, but there are other fish in the sea.