Queue the spooky music, rattle some chains, and get the wolf to howl…Tales from the Brain Jar is back! The journey through my brain jar themed sketch book continues. Andy Kuhn did this amazing Rex Mantooth sketch for me at the 2009 Megacon. Andy’s name is usually associated with the comic Firebreather. He has been working with IDW on their TMNT series. He also provided the art for the subject of today’s sketch, Rex Mantooth.

The Annotated Rex Mantooth is the funniest comic I’ve ever read. The trade paperback consists of three stories. On the left of each page is the annotated script for that page. There are countless intros at the sart of the book.  This is the kind of treatment meant for a literary greatness. That’s the joke; Rex Mantooth shared three issues with another comic. It’s a kung fu gorilla super spy who spouts obscenities and saves the world. It shouldn’t have fully annotated scripts, but it does, and it makes the whole thing even better. 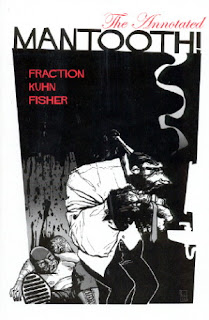 A lot of times when I get a sketch done, I already have a good idea of how I want the brain jar included. With my Starman, I knew it had to be a tattoo. On Jonah Hex, it had to be a wanted poster. I had no idea how to involve a brain jar with Rex. There is no Sergeant Brain Jar in the comics; it all came from Andy’s head. I sincerely hope that we’ll see more Rex Mantooth someday. Deep down I hope that appearance will include Sergeant Brain Jar.