The last update had the beer list up to 31, well on my way to that magic number of 126. Why am I counting to 126? That’s the number it takes in my local bar to get my own mug and a tasty 10% discount. Now as we found out with the Bacardi Silver Raz, the name beer list is a little misleading. While there is no liquor at the bar I go to, there are a few more things then beer. There is also wine. Now I’m not a fan of wine but I knew I’d eventually have to drink some. What happens next I was not expecting.


Check out the full story after the jump.

As mentioned earlier, Sunday was my birthday. Most of it was spent at the bar. There was a lot of beer drank. And next week I’ll go over those and include the ones from this week too. During all of the festivities I got a tray of beer shots, one of each beer on tap. There is a speed record but that point I was beyond going for speed. When I told the friendly bartender that I wasn’t going for speed he smiled and said, “Good, because I put some road blocks in there.” 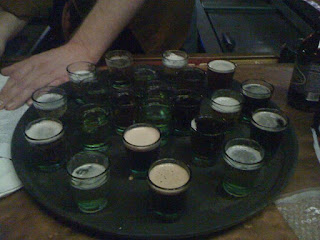 Roadblocks? What were the roadblocks? Turns out they were shots of the desert wines; Babuni Cherry, Babuni Honey, and Babuni Peach. The cherry was okay, the honey I actually liked, and the peach was wretched. I don’t like the taste of peach anyway, so that didn’t help. I shouldn’t have mentioned it how gross it was because my friendly bartender is evil. 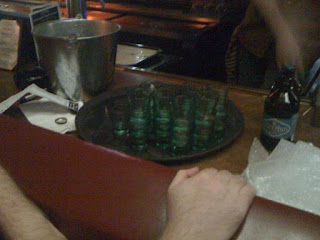 I finished the shots in a respectable amount of time and did not need to use the bucket that you see in the pictures. But then as the night went on, there would be random times that I turned around and find a shot in front of me. Once it was even balanced on the bottle of beer I had been drinking. Everyone one of those shots was Babuni Peach. And I knew what it was going to be every time before I even picked it up. I could have refused the shot, but that thought never crossed my mind. I think I’m someone challenged when someone puts a shot glass in front of me. It is like I have to take the shot or appear weak. There might be some deep issues there but no time for that now.

After getting a more sober recount last night at the bar, my friendly bartender said by his count there were at lest 10 of the Babuni Peach shots after I finished my tray. So do I get anything for all that peach flavored torture? Yes I do, for doing all of that I got all of the wines marked off my list. So the wines mark off items 32-47 on my beer list. For more on the actual beer I’ve been drinking, come back next week.
Posted by Ken O at 8:46 AM