Tales from the Brain Jar, #2

Last week I started talking about my sketchbook. I had my plan set in motion. I had run out of space on my walls and I was tired of getting things framed. I had even gotten the hardest part out of the way, the first sketch was done. It would be easier asking people to draw a character with a brain jar if they saw someone else had already done it, right? I hadn’t really commissioned a lot of work yet, so I was pretty naïve to what some sketches would cost. It was 05 then and I was getting ready to go to Megacon.


So what was next? Check it out after the jump.

Art Baltazar’s Patrick the Wolf Boy is sketch number 2! Art and Franco are fantastic guys to talk to at conventions. They do quick one dollar sketches in marker and crayon on a comic backing board. I have a least four of them outside my sketch book tucked away with my other art. The quickness and price of these  sketches make them very popular. Besides that, they are just all around nice guys.  Seriously, you talk to Art and Franco and you walk away smiling and saying, “aww, yeah.”

You probably know the name from their work on Tiny Titans and much later in the sketch book they’ll show up again in that form. For now though, it is all about Patrick. If you’ve never seen it, Patrick is an innocent little boy he turns into a werewolf under a full moon. He growls instead of talks and likes the chase squirrels. If’ you’ve read Tiny Titans before the art style and sense of humor are very much the same. It is a simple book, but it is one of those things that make me happy when I read it. 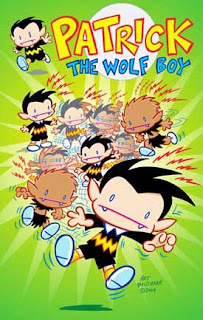 I'll have to get pictures of the giant Patrick painting I own.  That was bought at a Megacon also, jut not this one.  Patrick was not the only sketch I picked up at that Megacon, but you’ll have to come back later to hear about the others.
Posted by Ken O at 9:46 AM