Pinkerton in Concert? Please Make it so!

Rivers Cuomo told MTV that he is considering doing a tour where they play two nights in each city that go to. The first night they’ll play the entire blue album, the next night the entire Pinkerton album. Now the blue album has some amazing songs, “Surf Wax America” and “In the Garage” are favorites of mine, but Pinkerton is an amazing album. I would pull a serious road trip to hear the entire album played live. That’s saying a lot considering it would be a 35 minute concert. Pinkerton isn’t a very long album. 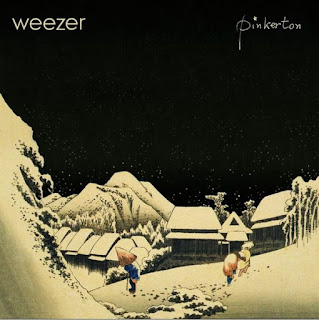 If you aren’t familiar with it, Pinkerton tanked when it came out. The songs were too dark and serious is the thing I see cited most often. Now it is considered a really important album and everyone loves it. I didn’t understand the original dislike. I got the CD when it came out and it has been one of my favorites ever since. Some day we’ll have to go into my odd music tastes that range from Dropkicks to Carl Perkins to Dean Martin, but right now I’m just excited about the chance of hearing “The Good Life,” “Why Bother,” “No Other One,” and “Across the Sea” in concert; especially “Across the Sea.”

If they added "Suzanne" to that set list my head would explode.
Posted by Ken O at 9:19 AM