Return of the Beer

Still feeling like crap. The only thing I’ve been drinking the past couple days is NyQuil. Luckily I still had some beers to list from my birthday and the Wednesday afterwards. This is all in addition to the shots that were pictured last week and the other shots of peach craziness.

The day started great with a Tucher. Then it went very, very south with Oude Gueuze. It was like drinking a dirty sock. Afterwards I went for the power trio of Miller High Life, 16oz PBR, and Natty Light. I kept joking that I was classing the joint. Of course this was when I was wearing a Viking helmet, so it’s all relative I suppose. 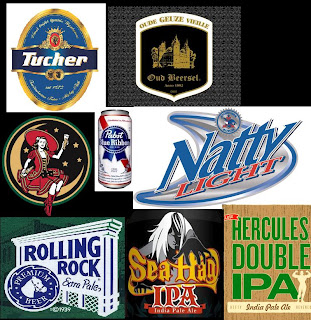 The week after that, I had a Rolling Rock. Here’s a tip, never drink Rolling Rock directly after drinking a Guinness. Water will have more flavor. Then I decided to take out two IPAs. I can’t give you much of an opinion of them, I’ve stated elsewhere that I’m not a fan of them. But I had a Sea Hag, whose logo is quite awesome, and a Hercules.
So these beers will be numbers 48-55.
Posted by Ken O at 9:03 AM