Well folks sorry to disappoint but there will be no Flash Friday today due to Ken being at Celebration V in sunny orLando. So we know what that means... 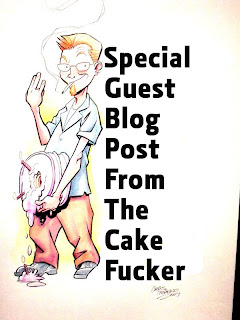 Even for us nerds that blend into normal everyday society and can hold a conversation with people that have no idea what the words Weyland Yutani mean, Nerd Rage can take a hold at any time. It all has to do with one particular persons "temple of nerd", that in which the viewer holds dear and has invested copious amounts of time with. Take me for instance. I like the character of Thor and am looking forward to the movie. With that in mind I can look at this picture from the movie and just shake my head and wonder why Asgardians are going to Glamor Shots.

However I do have a friend that holds Thor very close. He lost his facade of normalcy and showed his true nerd in the form of a Rage over seeing that. All that being said my personal triggers for this unfortunate phenomenon are the Green Lantern and Daredevil. So what has my underoos in such a bunch that a long winded description of Nerd Rage was required?

This is supposed to be Kilowog. Kilowog is a member of the Green Lantern Corps and one of the greatest drill sergeants for the new recruits into that illustrious group of ring slingin' space cops. He also has a penchant of calling others "Poozer" (sometimes entirely too much, depending on the writer). Where to begin on this picture? First off what is with that goofy look on his mug? It kinda looks like that turtle you could draw to get into art school. Does he even have a neck or is his head placed directly on his trapezius muscles? Oh the pain that picture brings. For some prospective this is what he should look like.

See that? A square shaped head that is not as angular, no stupid grin, and lo and behold... shoulders! He also does not have fraking neck rolls like King Kong Bundy. As Ken rightly pointed out, after I saw this and blasted his phone with pure Rage, that this is just a still and may not be final (one would hope). The strange looking costume is in and of itself a Rage worthy thing. That is a whole other post on it's own along with the first pics of Ryan Reynolds as Hal so I will leave that alone for now. So freshly vented I must admit that I am holding out that in motion all of this will leave my mind and I can enjoy a Green Lantern movie for what it is. That is the hope of all nerds in the powerful thrall of that strange force known as Nerd Rage.

Also is anyone suprised that Ken's favorite Lantern happens to be the one that rebels against authority, makes constant wise cracks, but still has a heart of gold? Just sayin', the guy has a type.
Posted by Brandon at 10:39 PM