Blacksad is one of those things I’ve heard about for years. “You have to read it, you’d love it,” people would tell me. I’ve seen the pictures for the book’s hero numerous places. Artists I really admire have done their own pictures of John Blacksad and I’d look at those and say to myself, I really need to track that book down. But I put it off and after a while I’d forget about it. Until earlier in July I finally got around to reading it. It helps that Dark Horse just put out a hard cover collection of the first three stories. And now that I’ve read them I can honestly say this, you need to read Blacksad. 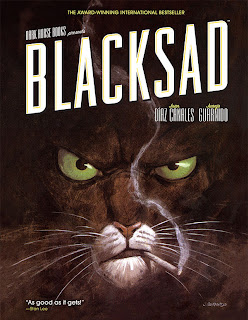 So what is so good about this book? Check it out after the jump.


Created by the Spanish writer/artist duo Juan Diaz Canales and Juanjo Guarnido Blacksad is a French comic about a black cat detective named John Blacksad. So far there have been three volumes. Somewhere Between the Shadows debuted in France in 2000, Arctic-Nation in 2003, and Red Soul in 2005. Red Soul’s first US printing is in the Dark Horse collection that I mentioned earlier. 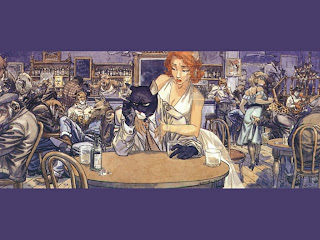 So, you can see the pictures I’ve posted already. This is not funny animal book. It isn’t some creepy furry sex book either, although sex does play an important role in the stories. These are honest to goodness noir detective stories and they are extraordinary. Raymond Chandler is my all time favorite author, people who knew this recommended Blacksad to me and I had doubted them. John Blacksad has now joined the ranks of my favorite private dicks.

The art is ridiculously good. Little details are buried in the backgrounds to the point you want to blow some panels up to poster size to look at them all. There are very few tricks with the character design; the characters tend to behave just as you would expect their animal counterparts to act. A pig will be slovenly, a rat untrustworthy, etc. You forget that they are animals and just start seeing them as people.

The first story is a noir standard, an old lover of John’s turns up dead and he has to find out why. The setup may sound basic, the story is not. It is the strongest of the three and I’ve already gone back and re-read it. Arctic-Nation starts odd. By the time I got to the end, it felt like it missed something in the setup. It is probably due to translation. The story introduces Weekly, who is a great companion to John. And once the story gets rolling, it is fantastic. The last story, Red Soul is very odd. It deals a lot with communist scares and the war. It is a wonderful story with lots of twists and turns, but the story struck me off guard at first.

All in all I can’t recommend the Blacksad collection enough. I’ve spent at least an hour going back and studying the art after I read the stories. In September the fourth Blacksad story, Hell, Silence is supposed to be released in France. I am extremely jealous.
Posted by Ken O at 10:57 AM