Just from the headline it sounds like it is going to be a horror story doesn’t it? Like the poor Australian surfer, Nicholas Edwards who was killed by a great white on the 18th. But this is a different kind of story. This is the story of a 10 foot great white sharked beached and the two people who found it. 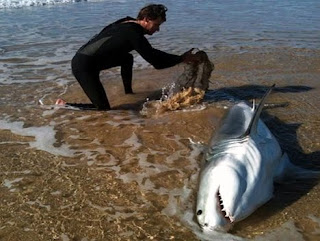 Andrew Eckersley came across a surfer pouring water on the shark and trying to dig a channel in the sand to get it back into the water. I haven’t seen any articles identifying the surfer, but that is even more impressive to me. That guy found the shark on an empty beach and started trying to help. If something happened there wasn’t even anyone else there to go get help. 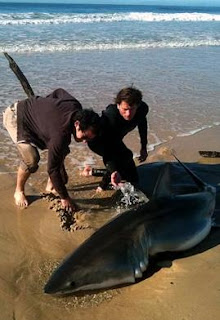 Anyway, Ruth Fahey also shows up and gets some incredible pictures of the whole thing (those are her pictures posted in this blog). The two men eventually have to drag the shark back into the water. They took the shark into the water past mid-thigh level, which has to be pretty scary. The shark eventually swam out to sea.

Sadly, it was probably beached because it was sick. The next day it was found on the beach dead. On top of that some asshole cut out the jaws as a souvenir. I feel bad for the poor shark, but I love hearing how the two men risked their own safety to try and save it.
Posted by Ken O at 11:28 AM