Depending on the circles you run in, you may have run into the game Cards Against Humanity before. I’m not saying anything bad about it, even the game’s makers call it a party game for horrible people. If you’ve never heard of it before I’ll run through a simplified version of the rules. There are black and white cards. The first person plays a black card, which contains an incomplete statement. The other people playing all play white cards, which contain items to fill in the statement on the black card. The funniest answer wins the round. 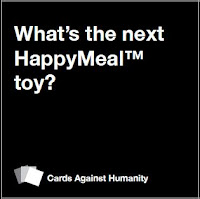 So if the first person laid down a black card that said, “What’s the next HappyMeal toy?” The rest of the people playing could possibly play cards that say, “A monkey smoking a cigar,” “Hulk Hogan,” “Sniffing glue,” or “Stephen Hawking talking dirty.” Obviously the last one would be the winner. And to be honest, I went with some of the tamer options to post up on the website. If it sounds like your kind of fun you can download the game for free at cardsagainsthumanity.com. 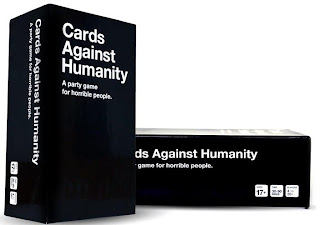 Now if you want to be really fancy you can go to Amazon and order a physical copy of the game. 25 dollars gets you all the cards in a big, black ominous box. Seriously, when it is full of cards, that thing has some serious heft to it. You get 460 White cards and 90 Black ones. The cards are professionally printed and while I wouldn’t make it a pool game, they can easily survive an accidently spilled beer. So if you have those kind of friends, impress them with your Cards Against Humanity.
Posted by Ken O at 7:06 AM