The Heroes Convention in Charlotte has ended yesterday I made the sad plane ride back home.  The convention was fantastic as always.  I managed to pick up some great sketches, hard to find toys, and some incredible interviews for the site.  Wednesday and Thursday I’m going to have all of the shorter interviews.  For Flash Friday I’ll be posting an interview with Scott Kolins.  Today though, is all about Nat Jones and his comic ’68.  Nat has previously worked on Death Dealer and the wrestling/70s Horror masterpiece, The Nail; so you know the book is going to look fantastic. 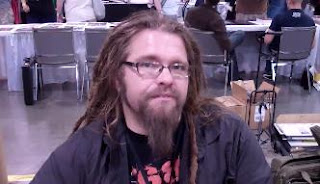 K: What are you telling people who are unfamiliar with ’68?

NJ: The basic premise of ’68 is that it’s the year 1968 right in the middle of the Vietnam War. Hell on earth, and the dead start rising.  The original Night of the Living Dead came out in 1968 as political commentary on the Vietnam War and we took a look at that.  That movie is really the basis for the cannibalistic zombie that people look to as the zombie that is the phenomenal that’s happening today in entertainment.  We took that idea and said, “What was happening when the original Night of the Living Dead came out?” and the biggest thing happening was Vietnam.  No one has really taken those two things and put them together.  That’s probably the most common comment we get is, “I can’t believe no one has thought of that.”
We’ve taken those two things and thrown them together in a really well researched Vietnam.  We really try to keep the authenticity and really explore what that era really was.  Between the iconic imagery, the war itself, and the different personalities that were there.  We look at everything from Richard Nixon, Jane Fonda, to the soldiers themselves out in the battlefield.  We’re really exploring a lot of new territory with zombies.  There are a lot of zombie books out there on the market right now; we really think we have something completely new and completely different.  It’s a new approach to the entire genre and all the reviews have been saying the same thing. Give it a try and I’m pretty sure you’re going to love it. 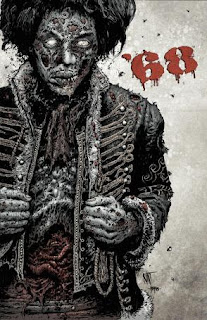 K: ’68 is from Image; is it an on going or a min-series?
NJ: The original story started in 2006, we did a one-shot comic.  Then all of the creators went their separate ways.  I went to Frazetta comics to work on Death Dealer.  Time eventually came where we were like, “Okay it’s time to get back and get back to that story.”  All of our schedules came together.  Right now we are in the middle of a four issue mini-series.  After that will be three or four one-shots and then back into another mini-series.  So it will be on-going in arcs. 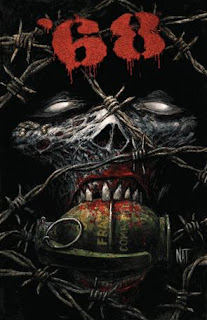 K: What can people expect out of the series?
NJ: They can expect a wide spread look at the entire world of the Vietnam era.  We start off the story in Vietnam, in campaign.  Then we swing the camera around to Cambodia and then we go all the way to Berkley, California to see the protests that are happening.  So we see the era explored and you’re going to see the world of that time deals with the fact that time pretty much stops when you’re dealing with the undead.
So a big thank you to Nat for taking the time to talk ’68 with me.  Besides just being an all around fantastic person to talk to, Nat has some seriously cool things in store for ’68, so check it out the next time you hit your local shop.  Come back tomorrow as 3 other creators answer or normal Comics, Games, and Booze questions.
Posted by Ken O at 10:44 AM