Prepare yourself! It’s back! It’s another, Tales from the Brain Jar!! While I was at Heroes I was lucky enough to get two more fantastic Brain Jar sketches, but it’ll be a bit before I talk about them. Since we’ve been going through the sketchbook chronologically today’s featured sketch was done at Dragon Con all the way back in 07.

The sketch is of The Nail and is done by Nat Jones. I know you’re thinking, “Nat Jones? That name sounds familiar.” That’s because just last week I ran the interview I did with him at Heroes Con about his new comic ’68. So consider this a preview of his fantastic art work. The sheer amount of ink on this page makes it one of the sketches that everyone stops and comments on. If you’re wondering where the brain jar is in this sketch, check out that sick wrestling belt. 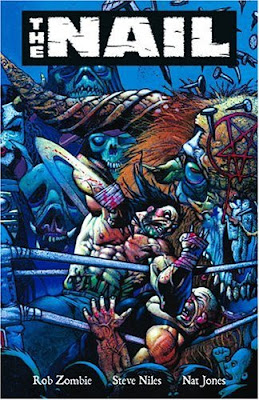 The Nail was a four issue mini-series published by Dark Horse in 04. It was a collaboration between Steve Niles and Rob Zombie. I already mentioned Nat Joes, he had the art duties on it. Joy Fotos did colors and Nate Piekos letters. The covers for the series were done by Simon Bisley. The series is set in the 70s and has the feel of a classic horror movie. There is a ton of story crammed into those four issues I honestly wish the series was an issue or two longer. 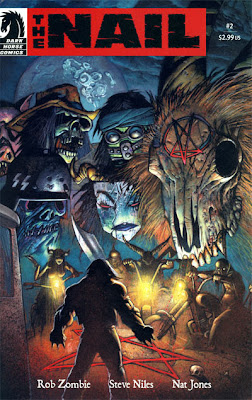 Rex Hauser is the Nail, a pro wrestler who decides to take some time off and go camping with his family. Obviously things don’t go as planned. The book mixes wrestlers, biker gangs, and demons in a delightfully bloody action-fest. I won’t give anything else about the plot away. The trade may be a little hard to track down now, but it is worth the effort.
Posted by Ken O at 9:32 AM