We interrupt our normal Hangover Thursday type post for the second part of Heroes Con interviews; I hope that no one minds too much. Today we’re talking to Steve Niles and Chris Moreno. 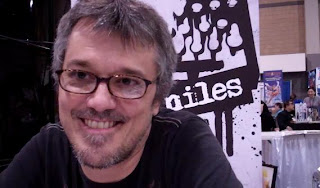 K: Obviously on That F’ing Monkey we talked a lot about Detective Tales. What else is coming out that we can tell people about?

SN: Well there will be more Detective Tales; I’m going to do the next one with Bernie Wrightson. It’s just the matter of me getting time to write some prose. I’ve got a novel to wrap for Simon and Schuster. They gave me another couple of months because the like it. I think. I hope. So I’m going to finish that up.

K: Who is going to publish that?

SN: IDW. It’s actually going to be split between IDW and Bloody Pulp.

SN: IDW, they are so great. Obviously I can’t say enough good things about them. Since day one they’ve been just great with me. They know I’m trying to get this creator owned thing off the ground so they’re giving me a leg up.

K: So are the majority of your works going to be coming out under that banner?

SN: We’ll see. I like to keep it spread it around. Do what ever I can.

K: Like the one October where almost every comic company had a Steve Niles book coming out for Halloween.

SN: That was hilarious. I know. And everyone one of the called me with, “Hey I got an idea, we’re going to put it out for Halloween.” October is always really busy for me and then November I got nothing.

K: Now I you worked on video game writing.

K: Is that something you’d like to do more of?

SN: I’d love it. I really enjoyed it. That’ll be out June 21st so they are really starting to push it now. If it does well then yeah, I’m always looking around. Those are actually hard jobs to find.

K: Are they talking to you about comic tie-ins for it?

SN: Yeah. I did like an 8 pager for Wildstorm. I think it’s an Amazon exclusive. You know, every site, every store has an exclusive.

K: Are you playing any games?

SN: Well I was playing L.A. Noire and then my Xbox took a nose dive. I’ve had it. I’m not dropping another 400 dollars. This is like the second one I’ve owned. I have no game systems right now.

K: And I know you aren’t drinking anymore. Normally I ask what your drink of choice is. 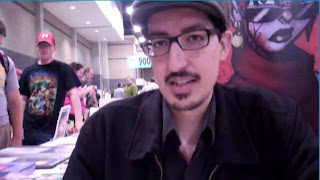 K: People that want to find your artwork, where can they see what you have coming out?

CM: Well the website is chrismoreno.org. I have a Deviant Art account at chrismoreno.deviantart.com those are the main places for where the artwork can be found. Coming up I have Zombie Dickheads which will be coming our around October.

I’ve got the 80/20 Principle that will be out in February. That’s an adaptation of Richard Koch’s self help book. It’s one of those help you get your life straight books. But it’s also good for people who run businesses; sort of a way to maintain efficiency in your life.

K: So is this a full on motivational comic or illustrations in the book?

CM: It’s a full on comic. It’s a company called Smarter Comics. They’ve been doing adaptations of some of the top selling books of this type. It’s very cool. When I was drawing it, it made me think a lot about Understanding Comics and also Will Eisner’s PS magazine that he ran for the military. Just sort of good information and using comics as the delivery system for it, so it’s pretty cool.

CM: First I’ll tell you what it doesn’t have. There’s no army men. There’s no scientists. There’s no Milla
Jovovich. That might hurt my sell. I don’t feel this huge need to explain where the zombies come from. We all know where they come from. Or at least we have a sense. What it does have is a lot of humor. A lot of guts, like blood and stuff like that. It also has characters you can root for. Four zombies that don’t eat people. That’s the other thing it doesn’t have, it doesn’t have zombies eating people. Why would you want this book? It’s hilarious, that’s why.

It’s basically about four zombies who don’t eat people that are just trying to find a place to crash out and relax for five seconds without running into stupid zombies that eat people and act like assholes. And their dickheads so that can’t even get along with each other.

K: Any chance of more Sidekick ever?

CM: Possibly. I talk with Paul a lot and one of the things that always coming up is Sidekick and what is going on with it. It is something we both want and we know a lot of people want it. It’s just sort or a matter of the timing being right. It’s just about making it happen.

CM: Well my Xbox just red ringed recently. I was in the middle of the zombie thing from Red Dead. Pretty awesome, pretty great. There are games I’m excited for. I want Arkham City so bad. L.A. Noire looks pretty bad ass. I want see how smart I am essentially. I want to see if I got what it takes. I like to think I’m a pretty observant guys, but can I solve murders? Who knows? Also because it is a faithful reproduction of L.A. and I live in L.A. now, I want to see what my apartment looked like in 1947. I want to see if it is just orchards. Is it just like orange groves or something?

K:What is your drink of choice when you go into the bar?

CM: Jack and Coke, pretty standard. We go to a lot of bars at shows. Some of them are really cool and some of them are of the nouveau fru-fru kinda cruddy douche bars. And those bars don’t have everything, so if you order a side car, which is a drink that most people haven’t made since the 30s, you might be shit out of luck. When the 20 something gel head looks at you and says, “A what?” But everyone has a version of the Jack and Coke.

That’s it for today! There will be a Flash Friday tomorrow; we’ll be running the last interview I have from Heroes, one with Scott Kolins.
Posted by Ken O at 6:11 AM