Happy Flash Friday everyone! I’ve been thinking a lot about the new DC re-launch lately. To be honest I find most of it depressing and a bit of my comic interest is dwindling. Despite saying all of that, I am looking forward to reading the first issue of the Flash. The one thing I found very odd though is how DC has really dropped the ball on some marketing opportunities. 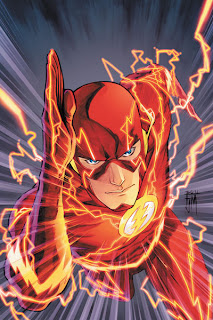 All things considered, the Flash had some pretty minor costume changes. Sure he got the required mess of unnecessary lines on his boots and costume, but he also got a tweaked symbol. So the first issue comes out next week, why isn’t a brand new t-shirt coming out with it? I realize we’ll probably see it in a few months, but if you really want to hype your changes why not do it when issue one is hitting the stands. 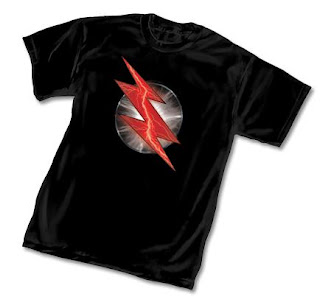 They were smart with Flashpoint, the Flash and Reverse Flash shirts were out before the books were. I still don’t really understand why the Reverse Flash shirt was black, but I think it looks cool and I’m happy I picked it up. I’m also surprised DC Direct didn’t have a full Justice League line up in their new costumes ready to go the same day of the Justice League launch.