Tales from the Brain Jar is back! Since last December I’ve turned this into a monthly feature because I was burning through the sketches in my brain jar sketch book way too quickly. The good news is that I still do have a buffer. Right this moment I have 11 sketches that haven’t been featured on the site yet. So I have some time to pick up more before I run out. Eventually I will run out of sketches but I hope that won’t be for a long time.

So with the slightly depressing news out of the way we can talk about today’s sketch! Scott Wegener did this amazing Atomic Robo for me at the 2008 Megacon. The brain in this specific sketch is Robo’s enemy, Baron Heinrich Von Helsingard. A lot of times it is hard to figure out why the character would have a brain jar in the sketch, but when one of the big bad guys in the book is a brain in a jar, it becomes pretty simple. 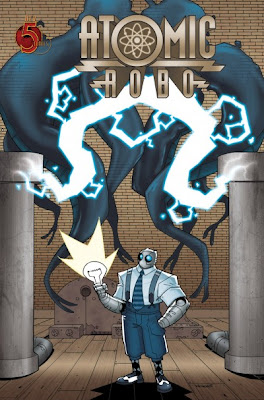 If you aren’t familiar with Robo he is an automatic intelligence created by Nikola Tesla. After that he goes around with his Action Scientists and runs afoul of all sorts of supernatural strangeness. The book jumps around through different time periods and mixes in a lot of humor with all of the action. There are a number of trades out there when you ready to jump into the weirdness.
Posted by Ken O at 12:06 PM