Happy Flash Friday! I was all set to talk about the first issue of the new Flash comic this week until I stumbled across something we just have to talk about. This is seriously the strangest piece of DC merchandise I’ve seen in a long time. DC themed Skelanimals.

Skelanimals have been around for a few years now. They are black plush animals with their skeletons printed on the material. They were featured heavily in one of Target’s past Halloween line. This December they’ll be dressing up as Superman, Batman, Green Lantern, and the Flash. They come in two varieties. The 10” plush cost 25 dollars and the smaller clip ones cost 9 dollars.

Except for some minor differences, the plush look pretty much unchanged from the normal line. Dax the dog is Superman, Jae the fox is Batman, CungKee the panda is Green Lantern, and Jack the rabbit is the Flash. For the record the names were all included in the description. Toynami is the maker of Skullanimals, so I really can’t see any rhyme or reason behind the cross over; especially with them coming out in December. At least if they came out in October they’d make a little more sense. 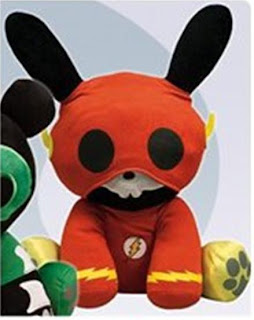 For the record this is the second comic book crossover Skelanimals have made. There was a SDCC exclusive Hellboy also. So if you’re interested, at least you don’t have to pay convention exclusive prices this time around.
Posted by Ken O at 7:00 AM