It’s Hangover Thursday, how’s your head? I think I’m sick sick, not hungover sick. Not sure, I’m still trying to fight it off. Because of that I didn’t drink anything last night. That doesn’t mean I’m not ready to talk about beer though. Actually we’re going to talk about beer storage today. I’ve looked at keg coolers, but the honest truth is that no matter how much I love Guinness, I really like picking up random beers that I haven’t tried yet. 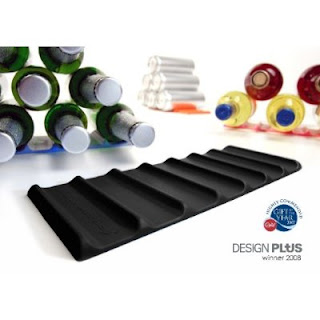 Since I’m keg-less and I’ve yet to get a fridge specifically for beer, I have to balance the available fridge space between food and different types of beer. Currently I have about four bottles stashed all the way in the back of the top shelf and I’ve completely filled the crisper drawer. When I finally do get my own beer fridge I’m going to make sure I maximize the space I have with the Fridge Monkey. 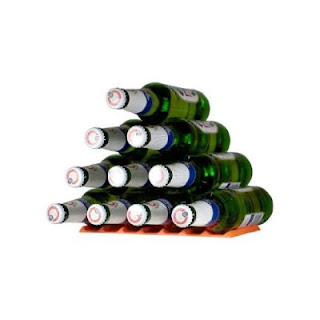 For seven dollars you get this soft rubber mat that lets you stack up to 10 bottles with out them rolling around. Throw two of these bad boys on each shelf and besides looking all artistic, you’ll be able to store a serious amount of beer. I do realize that storing beer on it’s side isn’t the best thing in the world, but if you’re buying something to help you stack more beer in your fridge I’m hoping you’re drinking it quick enough that storing it on its side won’t be an issue.
Posted by Ken O at 12:12 PM