Brandon and I have both announced how excited we are to play Bioware’s Star Wars MMO the Old Republic. Although I’ve been signed up to participate in beta testing for over a year now, I’m sad to say the only thing I’ve gotten to really see is leaked game play footage. There was talk of beta weekends, but that didn’t go as smoothly as they were hoping. 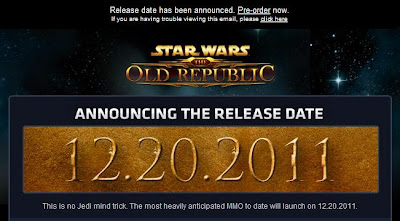 Now at least I know how much longer I have to wait. Yes, we finally have a release date! 12/20/11 is official. I’m pretty happy with that date too, although I really want to play Arkham City and Saints Row the Third are hitting in October and November, so I’ll have plenty to keep me busy until Old Republic finally releases. Also, they’ve moved on to their second stage of pre-launch guild building. So now you can befriend other guilds.

Are you signed up already? Any idea what you’re going to play?
Posted by Ken O at 10:27 AM