Happy Flash Friday everyone! Today we’re taking a look at how to show the world that you are a Flash Fan by dressing up your baby! That’s right; we’re looking at Onesies/snap suits/whatever you want to call them.  Think of them as baby Underoos or something. 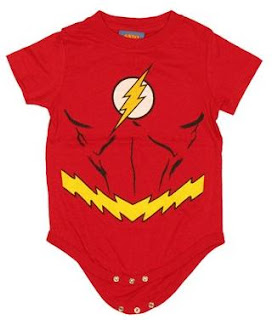 First up is the uber-detailed Flash costume Onesie. Not only does this one sport the Flash symbol, you also get the lightning belt and a vaguely sculpted chest. I think the belt part is pretty cool, but to be honest the chest definition kind of freaks me out. I think it’d look even stranger on a baby. 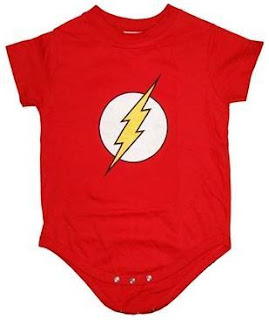 Next up is much more to my liking, a simple Flash logo. Besides not having any creepy fake baby muscles it has a larger symbol then the other suit. Sure you lose the belt, but I think it is a better over all look for the fastest baby alive. 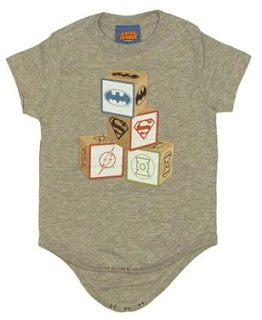 Finally we have one that isn’t just Flash-centric. Instead we get Batman, Superman, Green Lantern, and the Flash all represented on toy blocks. Wonder Woman and Aquaman’s symbols are both missing, but I guess the designer wanted a more uncluttered look. At least the Flash was included in this one.

By this point, I know what you’re thinking, Ken, why are you showing us all this baby stuff. Well the That F’ing Monkey family is growing. Patrick O. is still in pre-order status at the moment but is expected to ship sometime in early April. And yes, he will be getting at least one of these fine pieces of geekery.
Posted by Ken O at 11:28 AM