We’ve talked about the Star Wars: The Old Republic MMO a few times before it officially launched. Now that I’ve been playing it for a little while I can honestly say I love the game. I’m planning a much longer article on that though; today I want to talk about something very important to my Smuggler, his ship. Smuggler players are given an XS Stock Light Freighter; other classes are rewarded with other ships. 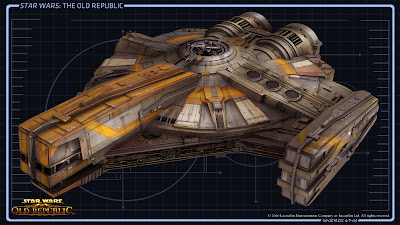 Even though I was disappointed with Dark Horse’s replica Normandy I’m going to put this out there, I want a replica XS. There have been tons of vehicle lines for the Star Wars universe, there needs to be one for the Old Republic. I’m not asking for something the size of a coffee table like the deluxe Millennium Falcon. Something in the scale of the old Action Fleet would be fantastic. Hell I’d even take something in the smaller Titanium series. This is an amazing looking ship and I want one for my desk. 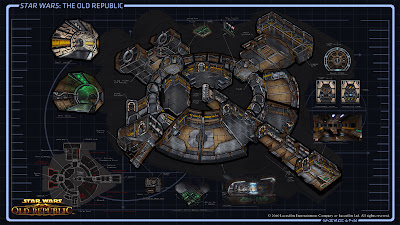 Please Hasbro. The only other option I’d have would be to buy the Millennium Falcon Lego set and then modify it to look like the XS. That sounds like a very large and expensive work around. Unless of course Lego wants to do an Old Republic wave, then I’d be rendered powerless and would have to buy one.
Posted by Ken O at 8:00 AM